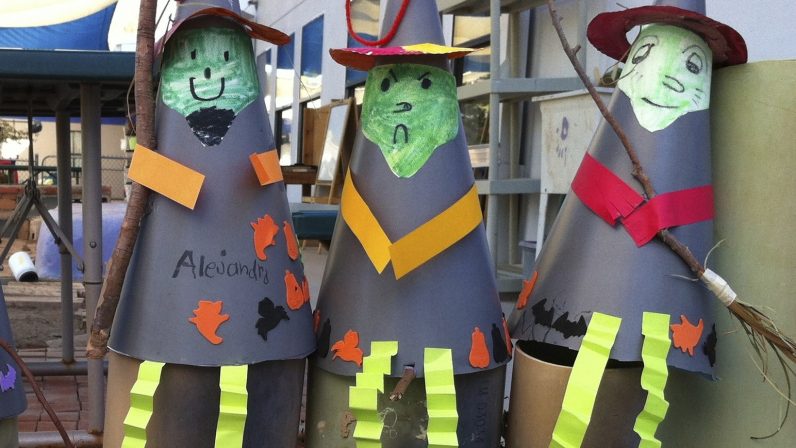 Since early summer, preparations for this week have been underway.  Our APA coordinators have been hustling up raffle prizes, printing tickets, ordering food, lining up bounce houses, posting messages on Facebook and asking parents to sign up for committee shifts.  Monday afternoon’s activity level in the office confirmed what the calendar indicates, this Friday is indeed the Seed’s annual Halloween carnival.  The carnival started back in the 1980s as an alternative to trick or treating.  Over the years it’s migrated away from the actual day of Halloween and is now established as one of the Seed’s major community events.  Each year has its own story, and within that story are other stories.

The story I know best is the Mystery Theater.  I’ve missed most of the carnival each year because of my participation in this annual production.  I was trying to remember the exact year it began and know it was a few years after the carnival itself started.  The only show I missed performing in was the first year, and it’s been quite a theatric journey.  Over the years it’s turned into a well-oiled machine with a structured writing process and production schedule.  We start with the script writing in mid-September, basing the performance on a children’s book or fairytale.  This year’s production is based on The Princess and the Pig by Jonathan Emmett.  What draws me back year after year is the chance to make people laugh.  I also love the writing process and am always fascinated with how the humor each player brings to the performance spins off of others’ hilarity.  Even during this final week of intensive rehearsals, we are still refining lines and actions to ensure that the humor is at its best.  That process continues even through the night of the carnival, culminating in the last show when we finally know our lines well enough to let the improvisations flow.

The Mystery Theater draws a large number of our alumni families to the carnival.  It’s an exciting moment to see the audience filled with former Seeds who still feel connected to the school.  Some alumni parents even continue attending long after their children have outgrown it.  The Mystery Theater serves another function; all proceeds from ticket sales go to the Seed Faculty Retirement Fund.  So in addition to the excellent entertainment, it benefits the Seed teachers.

Last night at practice, one of the players mentioned that her husband was surprised at how much we rehearse for the play.  He and, I’m certain,  many others didn’t realize how much time is spent on this special part of the Seed carnival.  If you haven’t bought your tickets yet or are thinking of skipping it, I’d invite you to reconsider.  The Mystery Theater Players deliver year after year, and The Princess and the Pig will be no exception.  We have three shows, at 6:30, 7 and 7:30.  We’d love to see you in the audience participating in one of the carnival’s most everlasting traditions.  You’ll catch a glimpse of the staff that happens but once a year.  Don’t miss it!