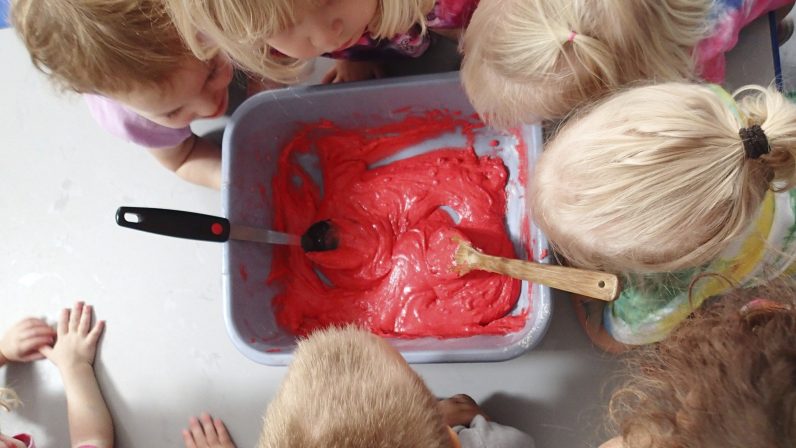 It’s All About Connection

#1:  On Monday morning as everyone was arriving in their freshly tie dyed shirts, one of the  kindergarten girls announced to her teacher, “My brother has a tie dye that looks like how the earth began!”  The teacher made sure I heard this quote, knowing my passion for kids’ quotes.  (When I checked on this later, it turned out that her brother had a much more detailed description/theory that included explosions and the swirling Milky Way.)

#2:  During a grade level meeting after school that same day, our PreK teacher shared an account of two girls working on their journals.  The first child drew a heart and was trying to figure out which letter the word “heart” starts with.  She was beginning to sound it out when a friend stepped in to help her. The second child remembered, “I know what heart starts with. I drew one the other day. Let me find it.”  She began to flip through the pages of her own journal until she found the picture that she had drawn of the heart. When she found it, she noticed that she had written an H, R, and T next to her work. “These are the letters you need,” she said. She read them aloud, making the sounds for the other child to hear, and then helped her as the first child wrote the letters down next to her heart.

#3:  At the grade level meeting for the youngest classes, I heard this story from the 2.5/3s  teacher:  “We were making play dough.  We mixed the dry ingredients first and before combining the water and oil I asked what they thought would happen when we mixed the two. After we’d all guessed, I poured. We passed around the mixture as it bubbled and separated and talked about what we were seeing. One child said, ‘I see bubbles,’ which were the balls of oil in the water. Next we passed around the liquid mixture and a tablespoon so everyone could add a little to the dry ingredients. What happened next was even cooler! I’d added a Kool-aid packet to the dry mix for an added level of sensory experience and when the wet mix hit the dry, it turned red! After that each child tried adding a scoop of wet to a new and still white patch of dry mix so they could turn their own portion from white to red.”  What started out as a group of two or three children ended up being a standing room only situation.

#4:  I’ve been working with a few of our parents to bring more visibility to the school through our Facebook page.  After posting the tie dye photos, one alumni Seed wrote the following:

“I’ve been showing my husband your Seed posts and I had him look at the website. He said ‘I think you should have just shown me all this when we started dating. It explains so much of who you are…it would have saved time. We should have gone on a tour before we got married, at least!’  He’s really jealous and wishes there was a grown up Seed.”

When I made the connection myself between these four stories and how they related, it helped me see that one of our most important roles as a school is to help our community feel connected.  It happens by teaching with intention and keeping our eyes wide open to what children are thinking and saying.  It occurs when teachers talk with each other to further our work of helping children put ideas together.  And it extends out to Seeds past, present and future who very much continue to belong.