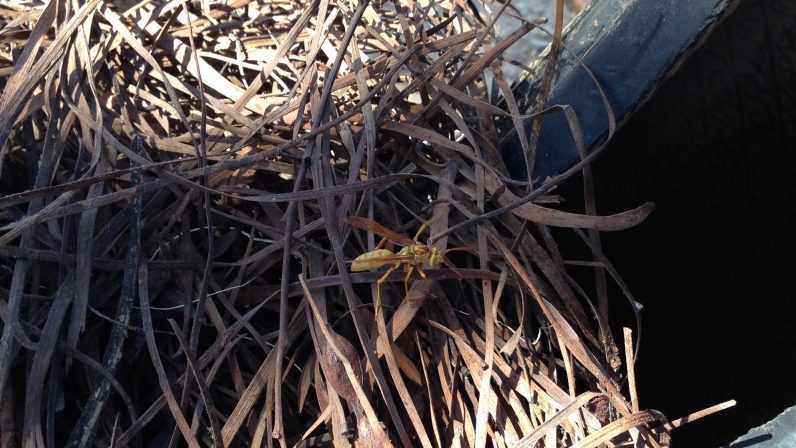 Wasp in the Exhibit

Earlier this week I was covering a playground shift in Gwen’s Castle.  A few of the kids had built a makeshift fort between the wall and a bush.  A brick annex was added, including a tire propped upright, held in place by large rocks.  Groups of children moved fluidly in and out of this space.  Just outside the castle walls, three girls claimed a plastic trash can, large enough for a child to crawl inside.  At the bottom of the trash can was a pile of acacia leaves that dropped to the ground and had been scooped into the can.  The pile resembled an oversized nest.  The girls brought it over and placed it inside the tire.  Recess continued, girls climbed in and out of the trash can and one was even rolled around the playground in it.  Seeing that brought a childhood flashback when we convinced my brother to climb inside a metal culvert pipe and we rolled him down a hill.  Not one of my finer moments of childhood kindness.  A shout from one of the children disrupted my reverie.

“Wasp in the exhibit!  Wasp in the exhibit!”  I turned to see a crowd hovering around the tire.  There, on the acacia leaf pile, was an unassuming wasp just  crawling around.  As I always do, I reminded the children to leave it alone and give it space.  The boy who shouted out gave us a play by play of the wasp’s activity.  I said, “I notice you are really observing this wasp.”  He said, “It’s because I’m a scientist.”  This warmed my heart, given that I’d spent part of my morning photographing evidence of STEAM work around the school.

What I’m noticing is the importance of play in the development of scientists.  Children learn all sorts of scientific information as they lift heavy rocks, touch a range of textures, and assemble materials in ways that promote balance.  Play, particularly outdoors in nature, provides surprises that invite response.  When a wasp suddenly appears, it brings a break in the action for young scientists to pause, listen, be still and focus intently on what it’s doing. An appearance like this inspires conversation, comparisons, stories and theories.  It also carries the message that we are all interconnected.

I’ve thought of interconnection quite a bit this week as we prepare to say goodbye to Billie Cruz, who is leaving the school to take a new job.  She and her family have been around the Seed since 2000 and she’s been on our staff since 2003.  Billie’s boys grew up at the Seed and her husband Andy created our first website.  Even after her boys graduated, we were fortunate to have Billie remain on our staff.  Her presence at the Seed will be missed.  These letting go experiences are never easy, even after over six decades of practice.  Yet, interconnect reminds us that we all continue to be a part of each other’s lives and even if we don’t see someone every day, they are still a part of us.  We wish Billie the best in this new adventure and hope that, like the wasp in the exhibit, she’ll drop in to the Seed from time to time to play, laugh, and have a little fun.