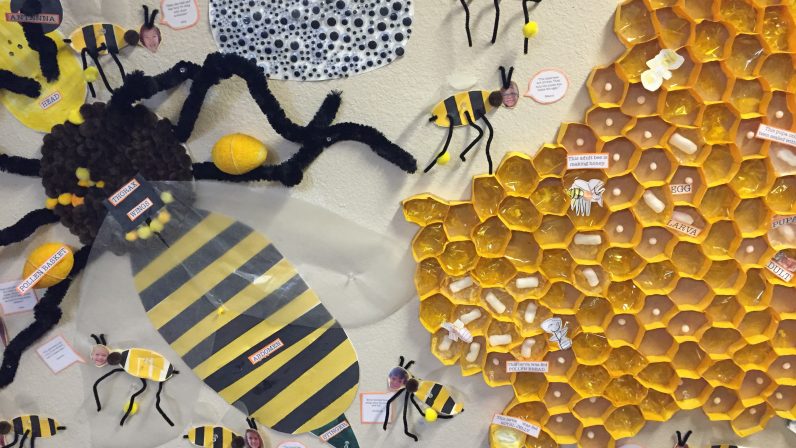 I encountered a swarm of bees on the playground this week.  Not the fuzzy black and yellow ones; they were human bees.  It was an intense swarm, with fierce negotiations around the hierarchy of a bee colony.  First there was the designation of the queen bee, as well as her responsibilities and privileges.  I heard one child say to the chosen queen, “You can sing all you want, because you’re the queen bee.”  As the swarm migrated from place to place, I heard additional assignments:  “You’re a carpenter bee,” with follow-up directions about where to go.  The bees continued playing harmoniously until the Power Rangers arrived.  I’m not sure what happened to the hive after that.

All of this bee business started in the PreK outdoor area, when a swarm of bees showed up several weeks ago.  Their presence ignited a passionate study of this significant species.  Throughout the course of the PreK’s bee study, they have utilized the arts to understand their topic.  They’ve created a paper honeycomb, made a larger-than-life queen bee and smaller worker bees.  Wednesday was Bee Day, a day of celebration for the PreK class.  They all wore yellow and black clothes, made personalized queen bee crowns, tasted varieties of honey (including some right in the honeycomb), had a picnic outside and gave a performance of their bee songs for Music Jay.  One “bee” was observed before school, immersed in his own imaginary world, flapping his wings and pausing to draw nectar from flowers in the kindergarten outdoor area.  No doubt, this child has integrated what he’s learned about bees.  During the musicial performance for Jay, which included a bee version of “Head, Shoulders, Knees and Toes,” I mispronounced proboscis.  The entire class resoundingly corrected me.  These kids know their stuff.

This study and the children’s passionate response, reminded me of a recent ASU Magazine article about STEAM education (https://magazine.asu.edu/march-2015/articles/featured-articles/gaining-steam).  The article makes a strong case for inclusion of the arts in science education, and, in fact, states that the arts offer a crucial perspective that is missing from a science-only curriculum:  “Arts-based inquiry is a very powerful way of exploring the world,” says Steven Tepper, dean of the Herberger Institute for Design and the Arts. “We know increasingly from the learning sciences that the kind of pedagogy that has high impact for student learning is exactly the kind of pedagogy that has been part of an arts curriculum for a long time.”

Clearly, the arts-based approach to studying bees has worked in our PreK class, just as it does throughout the Seed.  What’s even better, which is typical of others  school-wide, is what their teacher has in mind next.  As we talked near the end of Bee Day, she mentioned ways in which she could tell how much they’ve come to understand about bees.  Her next project is to teach them what we can do as human beings to help the diminishing bee population.  It’s what we strive to do with each day at the Seed, take in the world and then offer back the best gifts of our heartfelt selves.