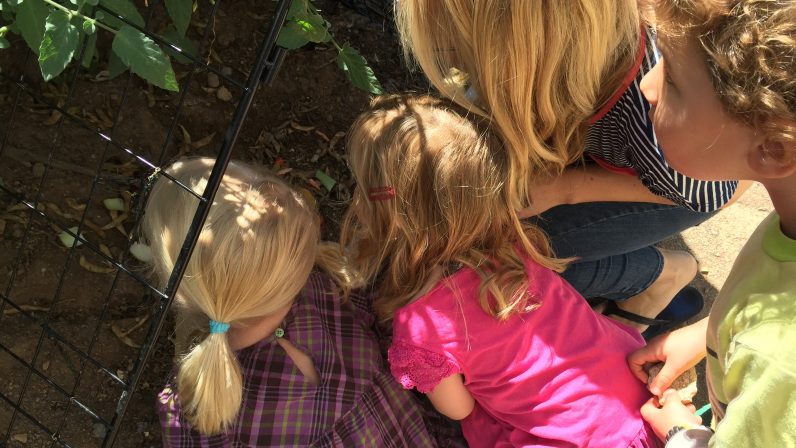 When I think of tweens, kids in the nine to twelve-year-old range come to mind.  At the Seed we have our own group of tweens, our Preschool 2.5/3s.  They start the year looking more like toddlers, some still in diapers and barely talking.  At the beginning of the year they need extra support with lunch containers and self-help skills.  At least for some, learning to speak up and use words requires a good bit of adult intervention.  This time of year it’s a whole different story.  Diapers are a thing of the past and everyone knows how to use the potty and wash hands.  And the language floating around…well, it’s hard to believe what comes out of the mouths of these three-year-olds.

On Monday I sat in on the Preschool 2.5/3s as they finished up circle and transitioned to snack.  As children got up to wash hands, their teacher asked them individually to tell her what they did over the weekend.  She wrote the survey results on the whiteboard.  One child moved in close to explain, “I had frow up.” She then elaborated by telling everywhere she vomited, including her car seat, her mom’s car, and her dress.  Not to be outdone, the next child described her sickness as well and added that she got Frozen bandaids.  Other activities included playing a game with their mommy or daddy, going to visit grandparents, and seeing Belinda, the pickle lady, at the farmer’s market.

As they joined their friends for snack, children were offered the choice of sauce or no sauce with their pasta.  There was constant conversation.  They spoke, listened to friends’ comments and asked for more pasta.  When one student threw his head back (obviously a common practice, since the teacher response was quick and well-articulated), a reminder about keeping heads up to avoid choking while eating was offered.  The reminder inspired the same girl who told the “frow up” story to recount how her dad had to stick his fingers in her mouth once to retrieve something on which she was choking.  In the midst of the conversation, the teacher counted, “1, 2, 3, big bite!” and several students took bites of their pasta.  When the pasta was all gone, out came leftover crackers and then pretzels until all appetites were satiated.

The conversation switched to the garden as the teacher said, “I checked the flowers. Can you guess what color they are?”  After a discussion about whether or not a milk carton was recyclable, the teacher handed a small bag of home compost to the child who brought it.  The child needed no directions regarding what to do with it and where it should go.  She took the bag right over to the compost pile and dumped it into the rich soil.

I lingered outside with the class for a bit longer, as shrieking children were chased by a fellow “monster,” plants were generously watered, and scraps that had just been deposited in the compost pile were appropriately covered with soil. I marveled at these children, at what they were learning, how they were communicating, and the way they are with each other.  Like every other group of children at the Seed, this collection of three-year-olds is nurtured each and every day by remarkable teachers whose ability to dream big is surpassed only by the vastness of their hearts.