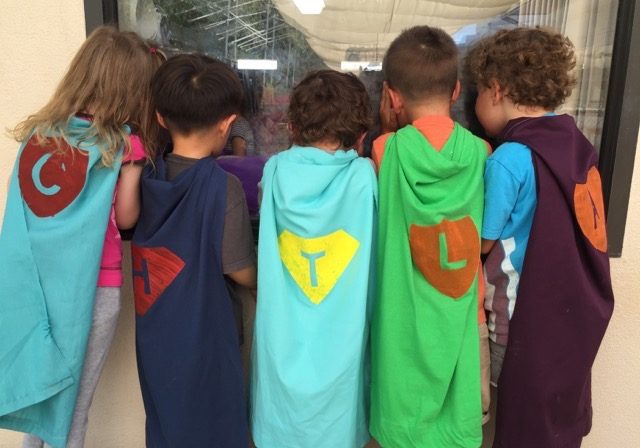 Last Friday I was standing in the hallway by the K-1 when a flurry of caped superheroes burst out of the Preschool 4s room.  Each superhero was sporting a brand new cape with the first letter of his or her first name boldly imprinted on the back.  Enthusiasm was so high I was surprised they didn’t literally fly down the hall.  As the children passed by me, each one spontaneously declared his or her superpowers.  Their powers were coming at me so fast, I had to ask their teacher Deb to clarify.  Here were a few of them:

The superpower that affected me the most was spoken by a girl who proudly exclaimed, “My superpowers are ice and fire.”

For several days now I’ve thought of ice and fire.  Ice is solid, cold, dense, and mostly unmoving (until it starts melting and becomes a liquid).  It represents life in a fixed condition, held in one place.  Fire is hot, constantly moving, consuming, and always seeking fuel to survive.  Fire is passion and creativity, with the ability to both nurture through warmth and cooking, and destroy in out-of-control  blazes.  Although not exactly opposites, fire and ice balance each other.

Superhero week, according to the preschoolers’ teacher, “was meant to reinforce ‘superhero’ behavior in daily life. It was inspired by a prevailing interest in superheroes from the kids and was a way for me to connect with new students, many with a keen interest in Superman, Batman, etc.  We read a range of books about ordinary kids who act in superhero-like ways.  Books like Ladybug Girl and The Amazing Adventures of Bumblebee Boy by David Soman celebrate the power of (a child’s) imagination to create adventure and excitement and are a worthwhile alternative to comic book superheroes and fairy tale princesses. We talked about the qualities that make someone a superhero and considered the heroes in our own lives.”  One of the children said, “Moms and dads are heroes because they take care of me!” Another child explained that a hero is someone who…”saves the day.”

The week that led up to their caped march down the hallway included superhero self-portraits and making the actual capes.  Their future holds the possibility of making masks to finish up their costumes.  Additionally, they’ll plan superhero play days and continue to explore the superhero theme in various ways.  Although I don’t have a superhero cape with my initial on the back, I, too, will be reflecting on my own superpowers.  Like ice, I will do my best to remain cool and solid, particularly when others around me are melting.  At the same time, I’ll also keep the fires of creativity and passion for my work steadily burning.  It’s what happens when you spend your days among superheroes.