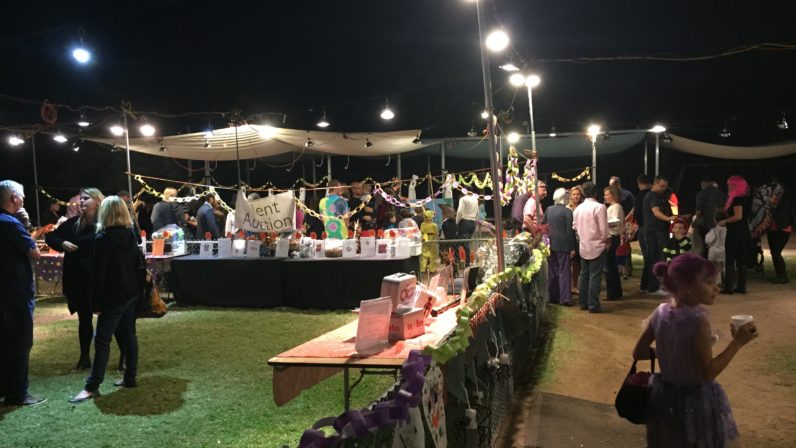 be strong. be courageous. be the light.

There was a major oversight in last week’s blog.  After composing an extensive list of all the people who contributed to the carnival’s success, I missed one of the most important people, one so obvious I totally missed him.  Bill.  For many of the tasks, we would also include his sidekick in maintenance, Richard.

If you enjoyed the lighting at the carnival, you can thank Bill, Richard, and their team of volunteers who spent dozens of hours sorting cords, replacing bulbs, drawing out the plan, climbing on ladders, attaching lights with zip ties, walking around the playground after dark several evenings to make sure lights point in the right direction, peering above the multi ceiling tiles to find the cord for the spotlights, then taking down the lights the day after and re-storing them for the next year.

This is just one of the many tasks Bill completes in his thankless job as the business and facilities manager.  Since 1987, and the ten years prior when he did the work after hours from his day job as a construction manager, Bill has quietly and consistently kept the Seed’s physical environment a safe and inviting place.  He has done this without asking for recognition or special attention.  Bill does the work because he knows it needs to be done, because he loves the kids and teachers, because he loves and believes in the Seed.  He delights in creating surprises like the outdoor sand kitchen that inspire imaginations.  It was Bill who came up with the idea for Gwen’s Castle, transforming a space that was once an enclosed pond into a memorial for a student that has also become a symbol of the school’s commitment to preserving natural spaces in which children can play.   Bill is so present in the Seed’s outdoor environment that the children see him as a part of it.  Last week one of the three-year-olds looked out his classroom window as Bill was working and exclaimed, “Oh, look!  The landscapers are here!”

As I was making my art this week, these seven words came to mind:  “be strong.  be courageous.  be the light.”  It’s what I’m practicing these days whenever I remember.  For so many of us the political climate right now is both stressful and disheartening.  It’s good to have sources of light to keep us on track.  Bill hangs the lights…and he is a light, around the Seed and in the world.