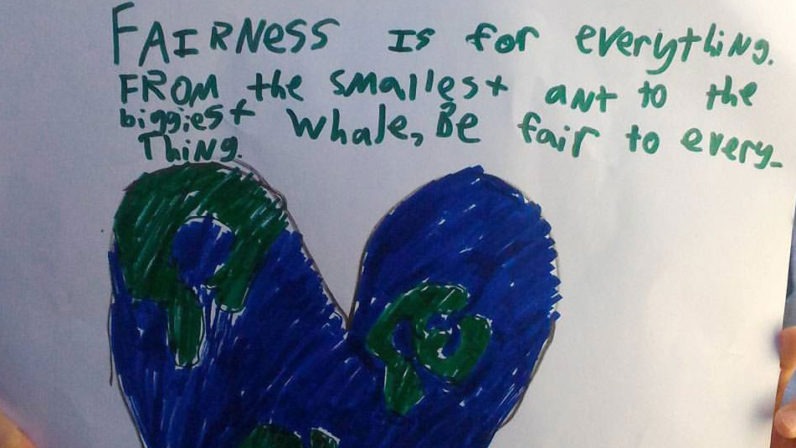 Voices Near and Far

It’s been a week of hearing voices, and not the kind that might question a person’s sanity.  On Saturday, I drove down to the state capitol to participate in the march.  I didn’t go with the intention of protesting against anyone or anything, I simply wanted to be there and be a part of it.  It was a peaceful event and all kinds of voices were expressed, both visually and with spoken words.  Dozens of past and current Seed families were there, each for their own reasons.  I was especially touched by a former Seed’s poster:  “Fairness is for everything.  From the smallest ant to the biggest whale.  Be fair to every thing.”  I couldn’t have used my voice to say it better.

On Monday I had the honor of hearing the voice of U. S. Supreme Court Justice Sonia Sotomayor, who gave the John P. Frank Memorial Lecture at ASU.   She described ways in which she had to practice if something was hard when she was younger.  One story was about learning to be a better writer.  Justice Sotomayor encouraged the audience to always ask for help, never give up, and to study civics.  She spoke about voting:  “We need 100% of the country voting to make it a real democracy…The voices of citizens are heard through voting and participating in community.”  She introduced the term “rainmaker” (an executive or lawyer with exceptional ability to attract clients, use political connections, increase profits, etc. http://www.dictionary.com/browse/rainmaker), saying that to succeed we need to become rainmakers in our own ways.  When describing her work as a Supreme Court Justice, she said as humans we are more similar than different.  That said, it took her a long time to get over feeling angry that colleagues disagreed with her “voice of reason.” She added that they all had to learn to respect each other’s passions.

The idea of respecting each other’s passions has lingered with me throughout this week.  Thoughts about voice have also been on my mind.  On Tuesday during writing with the 1st/2nd graders, we talked about how to write a list poem.  It’s basically a list with a twist at the end.  Here’s the group poem we wrote about voice:

What I love about this poem that lists ways to use your voice is that it includes the choice of remaining silent.  During this past week, when so many invitations to use my voice have been issued, it’s good to remember that it’s okay to pause and reflect before taking a step.  And just because I, or anyone else, have chosen to be quiet momentarily, doesn’t mean nothing is going on.  It’s a good practice in nonjudgment, both toward others, and toward ourselves.