Brief History of A Leader 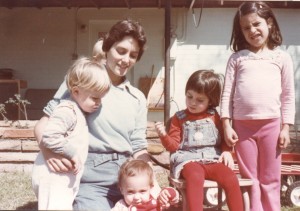 Thirty-three years ago, in 1977, I was a stay-at-home mom with a spunky three-year-old and a sweet six-month-old baby.  All I really wanted to do was raise the girls, pursue my love of art, and create a healthy, happy home in which my family could live and grow.  Starting a school was the furthest thing from my mind.  Yes, I was at ASU finishing a degree in education, but only because I thought it would be a good idea eventually to have a job that would give me time off in the summers with my children.

In truth, I never wanted to be a teacher.  When I was eight I thought working in a bakery would be the perfect job.  I loved that smell of glazed doughnuts and fresh bread.  During my ten year stint as an undergraduate, I tried every major I could to avoid being a teacher.  But every path led me back to education, and before I knew it, I found myself agreeing to start a school that eventually became Awakening Seed.  Now in its 34th year, the Seed has become much more than a job and although it hasn’t given me those anticipated leisurely summer days I wanted with my children, learning how to be the Seed’s leader and vision holder has turned into my life work.

For years I felt guilty that so much of my time went to the school.  I know my daughters and husband were forced to make significant sacrifices because I was always working.  As time has passed, though, and all of us, along with my five grandchildren, have spent some quality years together at the Seed, I think we would each agree that it’s been worth it.  It’s a dream come true that we, along with so many others, have  all worked on together.

Now that the Seed is thriving, I have more time to reflect on my evolving role as its leader.  Although I still put in my quota of hours and will continue to for as long as I’m needed, my relationship to the work has changed.  Instead of doing so much, I’m more often practicing just being present to what others need.  I’m happy to let my co-workers step up, make decisions, and take over some of the responsibilities that have historically been mine.  Chapter 17 of the Tao Te Ching describes the best leader as “one whose existence is barely known.”  It ends with this thought:  “Then, when the work is done, the people can say, ‘We did this ourselves.’ ”  I can think of nothing that would make me happier than some day being able to quietly slip away and leave those who remain to continue the work feeling this way.