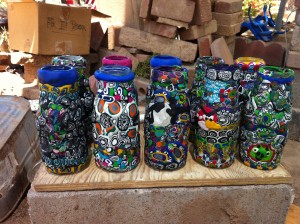 In three days the Seed will harvest another crop of graduates.  Each year my friend Gayle at Changing Hands Bookstore gives a gift card to each Seed grad.  She’s done this for years and says it gives her hope for the world, knowing that another group of Seed kids is heading out into the world.  I know how she feels.  This year’s harvest is a notable one and although they are a smaller class than usual, they have certainly made their mark at the Seed.  I’m certain they will continue to do so as they move on to new learning adventures.

This year’s grads are artists, writers, builders, and entrepeneurs.  I had the pleasure of spending many hours with this class throughout the year working on fictional writing and most recently, teaching them about millefiori techniques with polymer clay.  The clay work was especially enjoyable.  With cutting boards, blades, and an assortment of clay, we spent a collection of Wednesday mornings together, learning a technique that produced beautifully crafted vases as unique and colorful as the artists who made them.  As we combined the clay to create intricate designs, I caught a glimpse into their world and realized that this group is more like a family of siblings than a class of school children.  They scrap with each other, negotiate, and look out for each other.  They know how to push each others’ buttons and how to work as a team.

This was never more evident than during the musical production they presented for their schoolmates and parents last week.  Working with our music teacher, they took three Greek myths, their senses of humor, added lots of music, and wove them into one of the most extraordinary Seed performances ever.  Their passion for working together on a common project shone through every aspect of the production.

Their camaraderie was evident on the playground, too, as they moved from one location to the next, building every kind of structure you could imagine.  They figured out ways to use plastic tubs for roofing materials as well as lounge chairs.  Their innovations showed in the techniques they developed to stack, pile, tie, and arrange the most random items.  Thanks to the endless possibilities these children came up with for constructing on the playground, we now have an entirely new set of safety rules.  They pushed the limits in a number of ways.

Many of this year’s graduates have been at the Seed since they were young preschoolers.  They’ve grown up at the Seed and being a part of they lives has been an adventure like no other.  They have imagination and courage.  They are visionaries with an agenda and I hope the world is ready for them.  Most of all, they have heart, and I hope the world they come to know will be kind.