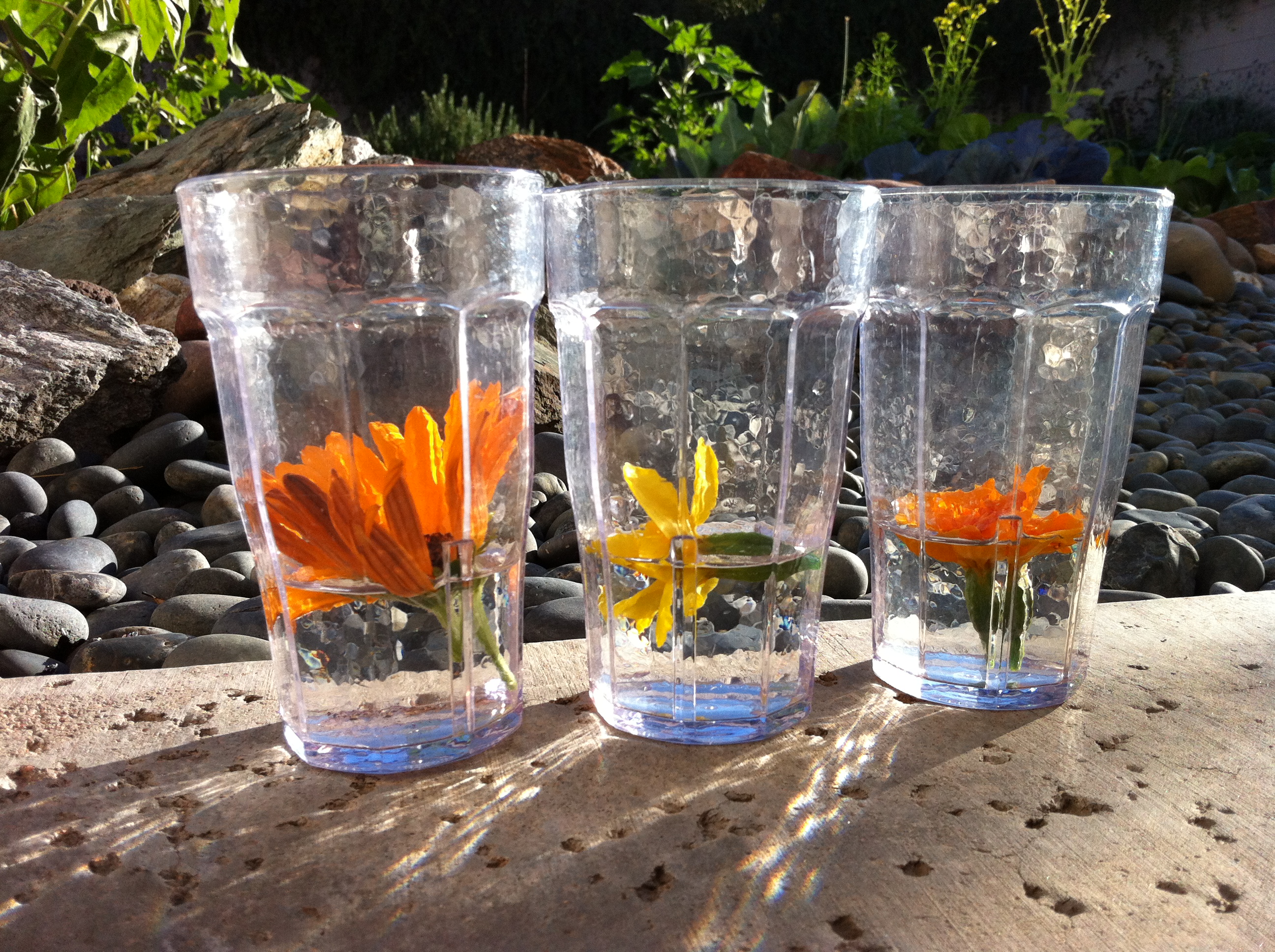 I’ve been thinking about integrity lately, mostly in response to a situation unrelated to the Seed.  I’ve pondered what it is that makes one a person of integrity and ways I can be more vigilant about living in an integrous way.  I was reflecting on this Saturday while out in the garden with three of our  grandchildren.  My grandson asked if he could pick some flowers and I said yes.  As usual, he cut the stems about an inch long, so they were too short to put in a vase.  When the flowers are cut too short, we traditionally float them in a bowl with water.  I suggested he do this and he said he’d take care of it.  After awhile he came back outside to play and I forgot about the flowers momentarily.  When I went inside for a pair of scissors, I noticed he’d taken three plastic cups from a drawer he could reach and placed each flower and some water in each one.  They were so beautiful I brought them outside to photograph.  Later as I looked at the photo, I decided his three flowers in cups were in some way connected to integrity.

I thought about different words that describe people of integrity:  trustworthy, kind, honest, dependable, honorable, steadfast, predictable, careful.  I tried to narrow it down to three, but was unsuccessful.  This morning as I took my morning walk in the dark, I figured out what the three cups represented.

The branch of yoga I have practiced since 2003 is based on what is referred to as the “Universal Principles of Alignment.”  The principles include the 3 A’s:  attitude, alignment, and action.  In a yogic context, attitude is the intention a practitioner brings to the mat, alignment is the awareness and application of certain postural recommendations, and action refers to the way a student does the pose, balancing stability and freedom.  Over the years I have heard these 3 A’s woven throughout my practice and have usually restricted my thinking about them to what goes on while I’m doing poses on my mat.  As I thought about integrity and the three cups with flowers, an expanded interpretation of the 3 A’s came to mind.

In the process of living our lives we have choices to make.  Taking those choices into account, we approach each day with a certain attitude.  It’s what we have to offer on a regular basis.  We have the option of aligning ourselves with the qualities of integrity or not, which are available as guidelines for living.  What we actually do, how we conduct ourselves is action.  It’s our personal expression of life.    When these three elements are in place and balanced, they become like the three flowers in cups; each steadfastly holding space for the light to shine through.

One thought on “The Three A’s”