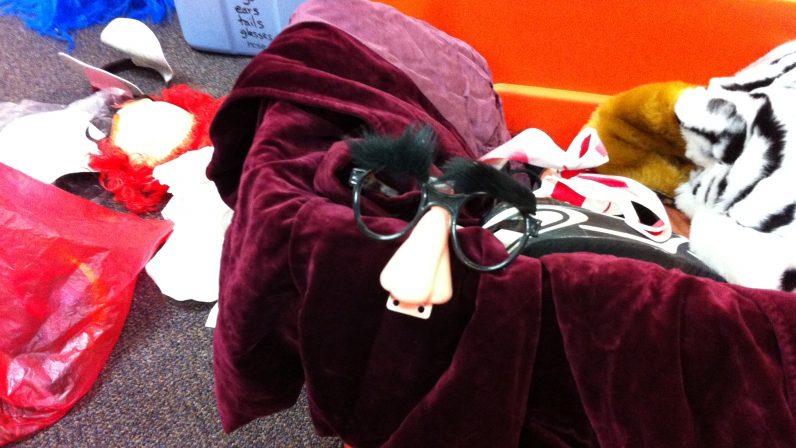 Who Knows about the Noses?

At our Mystery Theater rehearsal on Wednesday night we took a break from blocking out the action and laying down the tape for the stage to open the tubs of costumes we’ve accumulated over the years.  It’s become a tradition within a tradition that always inspires a walk down memory lane.  The recent night’s venture into the archives of one of the Seed’s longest standing traditions was no different.  As the dusty tops were removed, stories overflowed like the costumes tumbling out of their containers.  Previous players excitedly tried on costumes worn in performances past, stepping seamlessly into once-familiar characters.  Lines in nostalgic accents spontaneously filled the room along with theme songs from the old days.   A giant hot dog suit, a velvety Austin Powers jacket, and the pink Marge Simpson wig instantly revved up the hilarity level.  We even heard from some of the characters whose costumes weren’t in the box.

The plastic bag of “accessories” such as metal handcuffs, gaudy jewelry, tiaras, and various creatures’ noses brought additional animation to the conversation.  Platformed shoes originally used in a production about the Lice Girls (based on the Spice Girls) were celebrated for their long line of Mystery Theater service.  And there was also the bag of glasses with noses.

The nose glasses have been a signature feature of the Mystery Theater since its beginning.  Only Kathy and Mike Shores, the Mystery Theater founders, know the real history of this accessory.  Nevertheless, they have been included in every production since the very first one.  Obviously, there have been adaptations over the years.  Snow Whine, from Snow Whine and the Seven Dorks, had her nose attached to a swell pair of black wing-tipped glasses with elegant jewels attached.  A cow nose was attached to a regular pair of glasses to round out the costume for the cow who jumped over the moon.  And as the Mystery Theater players have aged visually, we’ve figured out all kinds of ways to attach noses to our regular glasses.  It’s the noses with glasses that have been the thread tying together all of the Mystery Theater productions.

In the next week, the Mystery Theater players will put in roughly 10-15 hours rehearsing for the big carnival night.  It’s an act of love, for our audiences and for the process of creating theater.  We look forward to entertaining all of you, our beloved audience, with noses and glasses in place.  We thank you in advance for tolerating our puns, sitting through yet another chase scene, and embracing our collective passion for hilarity.

One thought on “Who Knows about the Noses?”