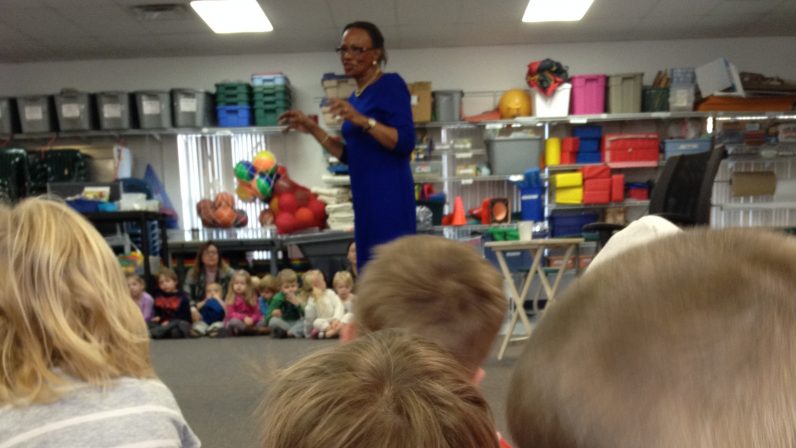 Why Was There Segregation?

Wednesday morning we were graced by our annual visit from Elsie Moore.  Elsie was a Seed parent and board member whose three sons are all Seed graduates.  We have a long history.  She’s come to the Seed every January for nearly thirty years to share her stories of growing up in rural Virginia during the Civil Rights Movement.  Elsie was one of the first African American students to integrate an all-white high school in the late 1960s.  Each time I hear her stories there is a new layer of understanding.  There are also new insights that come from the question and answer session.

After an hour of telling the roomful of children about her experiences with racism as a young child and then in high school, she moved courageously into the question and answer session.  One of her stories involves having food (mystery meat with peas and gravy) thrown at her in the cafeteria, followed by another incident of being pelted by chalk in study hall.  Once the questions began there was no turning back.

When asked the segregation question by a first grader, she paused and said, “I teach two 16-week university courses and we spend the whole time trying to answer that question.”  She went on to explain it the best she could for a seven-year-old, then moved on to address other raised hands.  What stood out in this year’s session was how Elsie fielded and responded to each question with equal presence.  Questions about peas and mystery meat were honored in the same way as the one about segregation.

As this year’s visit with Elsie came to a close, I mentioned to the kids that one reason we invite Elsie to come to the Seed every year is so they have a chance to hear about racism from someone who has experienced it firsthand.  At the Seed we believe it is important to have dialogue about these and other important issues, to ask questions and receive honest answers.  The conversation with Elsie will continue in individual classrooms as other questions and reflections arise.  Many of the children, including the two-year-old who asked her teacher quietly if she could move up to sit on her attentive big brother’s lap, are too young to comprehend the full meaning of Elsie’s stories.  However, they have a foundation upon which to build in future years.  Being included in the exchange of stories, questions and responses at such a young age is an invitation to join the bigger conversation about our responsibility to treat all human beings with kindness.  It’s a blessing to have our friend Elsie’s participation and guidance in this precious dialogue.