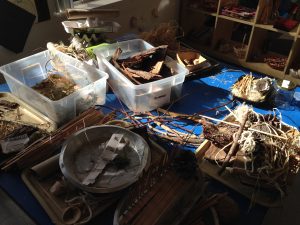 Tubs of tree bark, egg cartons, rocks and sticks rest on a sunny table.  They provide an invitation for four- and five-year-olds to use their imaginations to create bird houses.  The idea for making bird houses originated from one student and extended out to the entire class.  This happens all the time at the Seed.  Invitations are offered by children and teachers, then others choose to accept the invitation or not.  More often than not, it’s chosen and the results frequently end up in surprisingly creative places.

I’ve been thinking of invitations lately, especially since last weekend when I spent several hours with Erich Schiffmann, a yogi from Santa Monica.  When I’m not working at the Seed, I put in a good bit of time at Desert Song Healing Arts Center, either teaching yoga, taking classes or attending trainings.  Erich was here for a weekend workshop, which he generally offers annually.   I have studied with him several years prior and was delighted to be in his presence again.  I usually take detailed notes, not wanting to miss a word.  For whatever reason, I didn’t take a notebook or pen with me this year.  I just listened, absorbed what I could and waited to see what surfaced as the main teachings of the weekend.  Erich’s yoga is called Freedom Style, which I love because it has a unique organic quality to it.  He always uses accessible and often humorous metaphors for grasping the more elusive concepts of yoga philosophy.  This year he spoke extensively about meditation practice, using the metaphor of clearing the mind in the same way we use a squeegee to clean a windshield at the gas station.  Erich gave three specific instructions regarding the practice:

•  relax, make sure your body is comfortable
•  practice love as much as you can
•  when insights arise during meditation practice, pay attention

Most of the weekend focused on these three suggestions.  They seem so simple, yet hard to practice consistently.  His words moved gracefully through yoga poses, connecting all of it to our present time on Earth.  As I listened to Erich speak, I realized he was extending an invitation for each of us to step into a practice beyond what we typically consider to be our yoga.  He was asking us to be in ourselves in a deeper, more authentic way.  To every person this means something different.  My invitation from Erich was to join the circle of elders who are looking after the planet.  The idea of being an elder is one I’ve considered for awhile and am gradually getting used to.  Even though I’m in my 60s, it’s hard to think of myself as an elder, in large part because both of my parents are still living.  Nevertheless, as each day unfolds I sense a growing urgency to do all I can to model kindness and live in a way that promotes planetary stewardship.  I find I’m increasingly more vocal about encouraging the younger people I know to eat better and take care of themselves.  Each day I try to be a better listener, including what my own heart is telling me.  What I used to put off saying until another day I am now speaking more readily.

Accepting an invitation to fully embrace eldership is not a decision I take lightly.  It seems like a big responsibility, which it is.  At the end of the day, though, there is really no other option.  When it feels overwhelming, I remember it’s all about practicing love.  At the Seed this means devoting each day to supporting our wonderful teachers so they can do their work.  It means maintaining a safe space where everyone can grow into who they truly are.  It means raising a generation of children who understand that houses for birds are also important; that they, too, must be included in our practice of love.