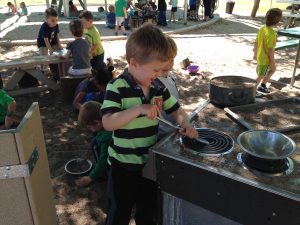 At last, the Seed has a real kitchen.  Ever since the school started in 1977, prospective parents have asked how we do lunches.  They want to know if they’ll need to provide their child’s lunch or if we have a regulation size kitchen to prepare nutritious food.  Until a few days ago, I’ve always said we have just a basic kitchen, not a commercial one.  Now I have a different answer.  A spring break project by Bill and Richard (Bill’s maintenance assistant) changed the course of Seed cooking in a big way.

Several months ago, the staff considered ways to enhance the playground to invite more imaginative play, including creating a “kitchen” to expand creativity.  I found a few prototypes on Pinterest and sent them off to Bill for inspiration.  A trip to the Goodwill and the hardware store later, plus many hours, and we now have a delightful, inviting kitchen.  Equipped with an oven (front door removed), a work station with hooks for hanging utensils, and a table with log seats, it was open and ready for business on the first day back from spring break.  At lunch time, pots were already bubbling over with sandy deliciousness.  Children sat at the work counter, deep in discussion as they worked.  What I appreciated was how 15-20 children could be in the area involved in a variety of ways, and there was plenty of room for all.  Some were cooking, others were “eating” their concoctions and others were just hanging out with friends.

The addition of our sand kitchen to the Seed playground opens several doors.  It gives the kids a new area to explore and exchange ideas with friends.  It’s a place where they can work out social interactions, solve conflicts and find acceptance.  They can practice communicating with their peers, testing out their ideas.  It’s one more activity option on an already vast space of possibility.  The kitchen also gives kids the message that food is important around the Seed and they are a part of it.  It’s a way to help link children to their future lives with food.

Around the time the sand kitchen was constructed, I received a link to a 2014 TED talk given in New York by one of our Seed dads, Matthew Moore.  https://www.youtube.com/watch?v=Cqe_5C5yQJU&feature=youtu.be  Matt’s talk is about his family farm in Surprise, Arizona.  It’s about the encroachment of suburbia on his farmland and his belief in the importance of his sons knowing what it means to be a farmer.  Through the art of digital recordings of plant life cycles and installations that bring these recordings to the public, the wonderment of growing food is communicated.  The intent of his art and the curriculum his organization, the Digital Farm Collective (http://digitalfarmcollective.org), has created is to inspire kids to be engaged in the growing process and appreciate its beauty.

Although the sand kitchen and Matt’s talk might initially seem unrelated, the more I think about them, the more I see how they work together.  They are each an attempt to reach out to children, to help them make connections between their actions with the earth’s and their own futures.  For whether they are witnessing the life cycle of a squash plant or practicing cooking with sand, they are receiving the message that what children think about and choose to do matters.  As they continue to integrate such messages into their minds through creative play, I’m certain they’ll make choices that will heal the earth and bring wholeness to their lives.  It’s a lesson that’s never too early to start learning.