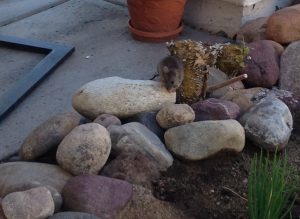 On April Fool’s Day I scurried around my house, trying to get out the door in time to be at school by 7:30.  It was lice check day, and I didn’t want to let down Team Lice Check.  Besides, being April Fool’s Day, it was a great opportunity to trick the older kids into thinking they might have lice. Knowing I was down to the wire, I went into my study to close the blinds.  As my hand reached to pull the cord, I glanced out into the garden and noticed a rat hustling across the dirt.  Seriously, a rat?  No fooling, there was a rat in our back yard.  In no time I realized what it was after—the fresh cut sunflower heads loaded with seeds.   The rat hung around for awhile, nibbling on seeds long enough for me to catch a few photos.  Then we both hurried off into our days.

I thought about that rat all day.  My granddaughter, who recently owned three rats, thought it was funny.  Other people were more on the horrified side, finding it hard to imagine having a rat in their back yard.  I’m still not sure how I feel about it.  Our garden has always been creature-friendly.  Quail families frequent our lantana bushes during nesting season.  Hummingbirds, roadrunners, bees, ladybugs and varieties of lizards feel welcome among the rocks and vegetables of our back yard.  We’ve known for awhile that someone furry and brown was living under the lavender plants and I’ve always assumed it was a little mouse.  No problem.  So why does a rat trigger such a different response as it runs among the onions on its way to a breakfast of sunflower seeds?

These questions come up quite often as I pull weeds, uncover scorpions and think about the gophers that frequent the Seed.  I think about the fine line between plants or creatures that are desirable and those that aren’t.  Some have reputations which precede them, but how do I know for sure that the rat in our backyard isn’t helping out another creature like Templeton helped Charlotte in Charlotte’s Web?

As the week unfolded, I thought of my rat writing.  I wasn’t sure where the words were headed.  I felt like something was missing in my thinking.  This morning I received a message from a site that sends out daily inspirational quotes with a commentary.  Today’s read like this:  “A plant is a weed only within a certain context; one person’s weed is another person’s wildflower.”  The commentary referred to a weed as a plant that grows where it is unwanted.  When I read the word “unwanted,” I thought of the rat.  It wasn’t doing anything wrong, just looking for food.  It didn’t know it was in a garden cultivated by humans.  It was just hungry.  If the rat shows up again, I’d be willing to share a few more sunflower seeds with one furry brown rodent.  If there is a next time, though, I just hope he or she won’t be accompanied by an extended family.  That could be a problem.