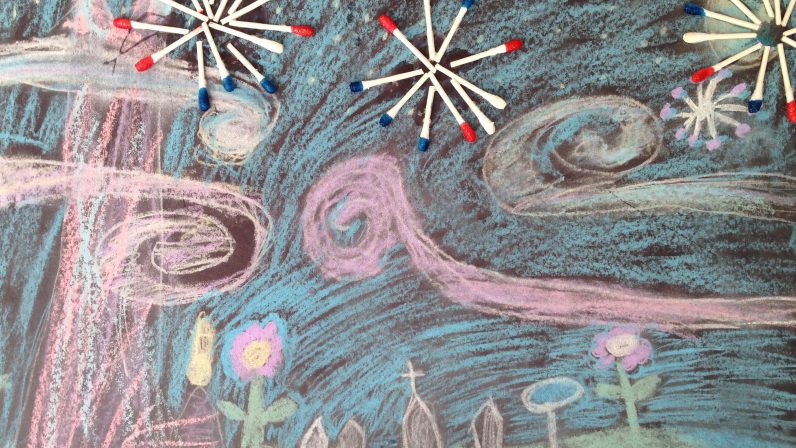 We all know it’s hot.  This time of year is what we endure as a trade-off for the winters we enjoy.  While people in other places are digging themselves out of snow drifts, we bask in the sun.  During months when others have to rely on produce shipped from far away, we can eat local freshness right out of the ground.  A few months of extra perspiration is worth it in my book.

One of this season’s highlights is the 4th of July.  For one thing, it’s nice to have a holiday right smack in the middle of our summer camp.  A day for a breather.  It’s also fun to make art that reminds us of the fireworks we have a chance to see this time of year.  This week we’ve used Van Gogh’s “Starry Night” to inspire works of art.  Stars and sparkly skies fill the hallways.  It’s a week of anticipation, knowing the fireworks lie ahead.

As I anticipated writing this post about Independence Day,  I remembered 4th of July celebrations in the small town where I grew up.  There was always extra excitement for me as a kid, because my birthday is the 5th.  We had a 4th of July parade and we always participated.  My dad had a 34 Ford coupe we called the “jitney.”  (I looked up the word “jitney” and found out it’s somewhere between a bus and a taxi, or can mean an illegal taxi operation.  I’m certain ours was legal.)  My dad was in the color guard so he’d march at the front of the parade, carrying the flag.  Then at the end of the parade route where he’d parked the jitney, we’d hop in with him and re-join the parade.  Along the route, on behalf of our family business, the Thayer County Bank, we’d toss bubble gum, candy and wooden nickels out the jitney window to kids lined up along the red brick street.

As it started getting dark, neighborhood kids gathered at the dead end of our street to shoot off fireworks.  We had sparklers, pop bottle rockets, fire crackers and snakes (the black pellets you light and they burn to create a snake-like shape from the ash), which we were allowed to light freely with little to no supervision.  Later the grown-ups joined us as bigger items were brought out.  One time, wearing a white shirt, I was holding a lit Roman candle.  Initially it shot off without a problem and then all of a sudden backfired.  Since I failed to hold it off to the side as instructed, my white shirt had a big black spot on it.  Fortunately, I wasn’t injured, just left with a good story to tell.

Our childhood, especially where my siblings and I grew up, held considerable freedom.   The kind of independence we experienced is sadly becoming extinct in most childhoods.  I like to think the Seed is somewhat of a stronghold for children to experience the freedom to create, imagine, explore and wonder.  At the all-school meeting on Monday, one of the teachers mentioned the current playground trend of collecting empty cicada shells.  She held up a big bag of recycled sandwich bags and offered them to anyone wishing to collect cicada shells, instead of wasting new cups.  There it was, an invitation that both supported curiosity and promoted earth-friendly practices, quietly presented during a week typically noted for its fanfare.  On Friday night when I’m enjoying the 4th of July fireworks with my family, I’ll keep in mind that’s it’s how we are on the regular days that matters most of all.