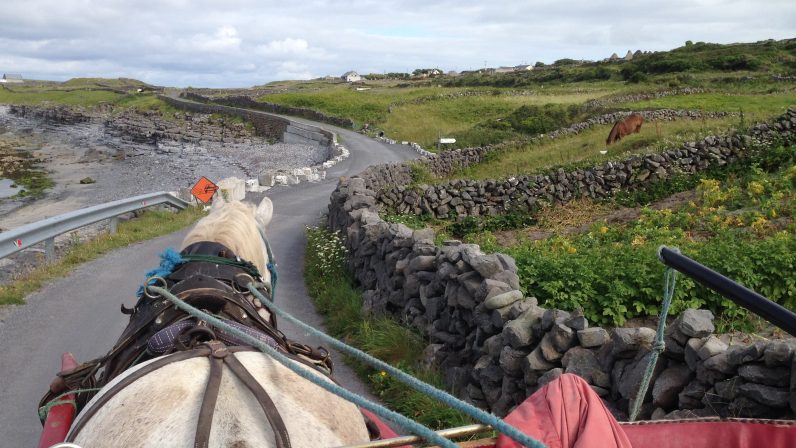 This morning a parent asked me how many first days of school it’s been for the Seed.  Thirty-eight, to be exact.  More than half of my lifetime.  I’m feeling calmly excited about this year we’re devoting to inspiring innovation.  Before I start writing about school, however, I need to write about Ireland.

In July, Bill and I flew to Dublin for the biggest adventure of our lives together.  We rented a car and quickly figured out driving on the left side of the road and how to navigate the roundabouts.  We were a team.  After a day in Dublin, checking out the Old Library at Trinity College, we headed to County Clare in the West of Ireland.  The first few days felt like being in a movie.  After eight months of studying maps and researching destinations, it all seemed so familiar.  My interest in County Clare, particularly the Burren area, came from the work of John O’Donohue, an Irish poet and philosopher who was born and grew up there.  John wrote and spoke so eloquently about that place and I wanted to stand on the landscape so dear to his heart.  The Burren is a remarkable area of rolling, weathered limestone hills.  The cracks or “grikes” in the limestone form unusual patterns which invite the imagination’s wildness.  It’s an ancient place with both historical and archeological sites.  I felt connected to this area, where John is now buried, after passing unexpectedly from this world at the age of 52 in 2008.  I understand firsthand why he loved the Burren and County Clare so much.

Before heading north along the west coast, we took a ferry to Inishmor, the largest of the Aran Islands.  They are situated in the outermost part of Galway Bay, facing out into the wide Atlantic.  We weren’t allowed to take our car to Inishmor, so when we arrived there were a dozen or more drivers with vans, trying to entice us to see the island for a price.  Instead, we hired a weathered man with a red horse-drawn cart for our tour of the island.  This turned out to be a highlight for both Bill and me.  The man, whose family had lived continuously on Inishmor for 300 years, had been driving visitors around in his cart since he was fifteen.  He talked of the island’s history, his family, and the island’s delicate dance between sustaining life there as it is amidst the rapid infusion of technological developments.  We decided later that it was our closest encounter with the old Irish traditions and ways of life.

There were other places that captured our hearts and imaginations—the Markree Castle in Sligo, Connemara’s misty mountains, the Giant’s Causeway in Northern Ireland, and the Hill of Tara, where the ancient High King gathered his people for ceremonies.  Each place with its unique weather and landscape offered just one more glimpse of Ireland’s complexity.  It’s one of those places that stays with you, long after you’ve crossed the Atlantic and returned to American soil.  Ireland’s mystical wildness continues to float through my dreams, sparking my imagination and inviting me to live from an inner awareness that came to life in landscapes of limestone and green.  Who knows what will surface in the coming year as we seek to inspire the minds and hearts of our brand new collection of Seeds?