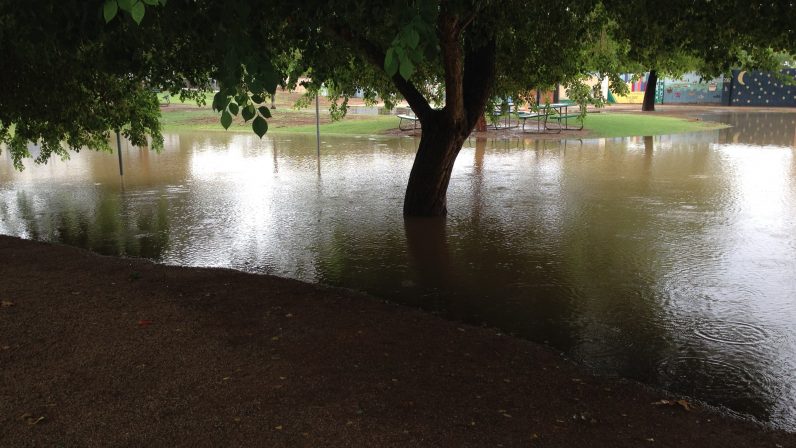 And Then It Rained

I knew it would be a rainy day schedule, based on how hard it poured Sunday night.  I just didn’t know the extent of that schedule, for the Seed and the rest of the valley.  Reminiscent of snow days when I was a kid, it was the first ever closure for the Seed due to weather.  As the morning unfolded and a delayed start of school became a full closure, I knew we were in for a different kind of day.

There was a period of time during which newscasters requested that only emergency workers leave their homes.  Being the rule followers that we are (depending on your definition of “rule follower”), Bill and I decided we’d go check on the Seed by walking the 3.5 miles between our house and the school.  When we left it was still raining, so we grabbed our boots and umbrellas and set out.  We passed flooded parking lots, water retention areas swollen with rainfall and waded through ankle deep run-off.  Along a small canal we noticed a nursery with well-watered cacti and saw the tiniest frogs I’ve ever seen hopping away from the canal enroute to higher ground.  At Vineyard and 28th Street there was so much water moving from the golf course to the canal that it formed a small waterfall.  One of my favorite sights was two beautiful horses standing together on a island of dirt, completely surrounded by water.  Before I could get my camera out for a photo, they gingerly stepped down from the mound and into the muddy pool.

It rained on us the whole way to the Seed.  Needless to say, we were soaked by the time we arrived, even with umbrellas.  We expected more water in the parking lot, and were pleasantly surprised to notice mostly just mud left over from earlier 40th Street flooding.  The playground was a different story.  The water level was higher than we’d ever seen it, including a “moat” around Gwen’s Castle.  Both sand circles were pooled and two of the trees were submerged by at least a foot.  The flood created a shoreline like we’ve never had.

Each day since Monday, the water level has diminished.  The moat has been absorbed into the earth and mud is drying up.  Children have gathered along the shoreline, floating newspaper boats out into the water.  Metal bowls  launched as boats now rest on the re-emerging grass.  A new crop of mosquito larvae was discovered, with ideas for how to prevent them from maturing.  One child asked his mom to make sure Bill and I left the water for a few more days.

There is still dirt in the Seed parking lot and evidence of erosion is prevalent around our neighborhood.  Our lives were inconvenienced by an overabundance of rain, a storm billed by some as a 100-year flood (similar to those we had in the 70s), but other than that, life goes on.  On this thirteenth anniversary of September 11, 2001, I recall images of debris and human lives raining down on New York City, and am thankful that our rain was just water.

One thought on “And Then It Rained”