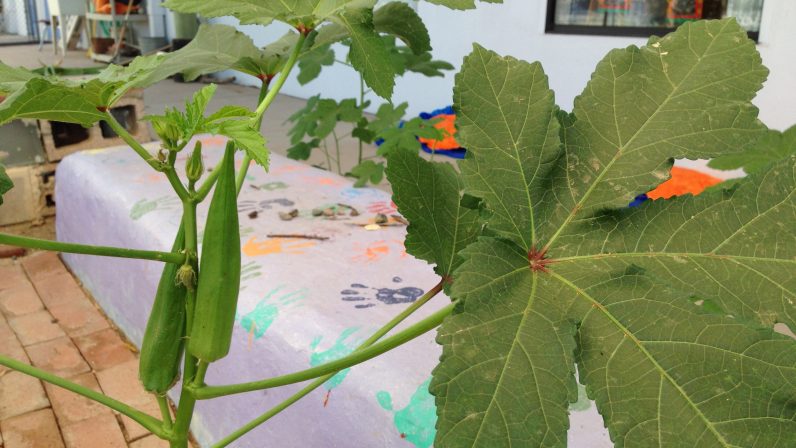 A small okra forest fills the space between the sidewalk and straw bale bench in the kindergarteners’ outdoor area.  It was not planted intentionally, by the class anyway.  When I first noticed the broad green leaves, I thought it might be okra.  Although it’s a food not high on my list of favorites, I’ve tried to grow it before and it seemed familiar.  The two pods provided confirmation.  When I checked with Kerri to see if they’d planted okra, she told me a story about one of her students who loved it and often brought okra for lunch last year.  Hmmm…it’s likely that a few of those juicy white seeds landed in the dirt and turned into the current mini-forest.  After further investigation, I learned that the student who loves okra planted some at home with his parents and the plants were unfortunately eaten up by local rabbits.  Which made our volunteers even more significant.

A couple weeks ago I attended a gardening workshop with Greg Peterson from the Urban Farm (http://www.urbanfarm.org/the-urban-farm-story).  The focus was on how to think about gardening in the desert.  Greg talked quite a bit about the solar aspect, where the sun is going and the kinds of plants that thrive under certain exposures.  He spent at least half of the workshop talking about soil.   He said that dirt won’t grow much of anything by itself—soil needs dirt, moisture, organic material, air space and everything that’s alive in the soil.  His strongest recommendation was to keep building the soil by adding organic material (compost) over and over.  I was happy when he suggested just adding compost to the top of the soil without doing a lot of digging.

There was one bit of wisdom that stayed with me, although it hadn’t been given nearly the amount of time as soil preparation.  Greg reminded us to pay attention to special plants that come up, especially the volunteers that choose to sprout on their own.  My interpretation of this statement was that these plants want to grow in their chosen location.  They are a good match for the environment in which they reach up through the soil.  They are strong and hearty.  I thought of this as I discovered two beautiful artichoke plants in my garden, most likely from plants I allowed to go to seed last spring in a spot I was planning to designate for composting.  And the apple tree going on its fifth season, originated from my granddaughter’s random planting of a seed from her apple.  As I thought about this, the okra forest came to mind.  I don’t know if there’s a deeper meaning behind the okra’s appearance in the kindergarteners’ outdoor area.  Perhaps it’s a message telling us all to pay attention to the surprises in our lives.  For me it’s also an invitation to be a little more open-minded about certain foods I’ve shied away from.  And maybe it’s a way to see someone in a different light through understanding what they love.