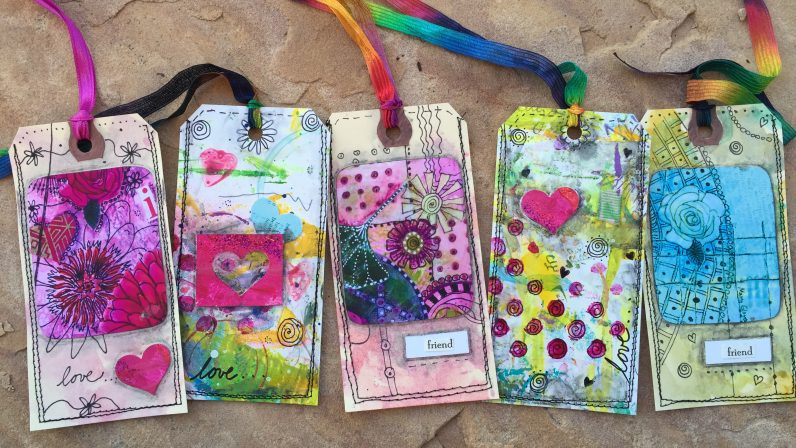 On January 1st, I started a yearlong art course.  Once a week, for 52 weeks, I will receive an online lesson to play around with and practice.  The second week I learned how to make altered tags, which has turned out to be a whole lot of fun.  I keep thinking of different ways to use my previous art and blend it into something new.  I also ask myself, what do the tags have to do with anything related to school?

Wednesday morning our dear friend, Elsie Moore, came to the Seed to tell her stories of growing up in rural Virginia during the Civil Rights Movement.  For an hour we heard recollections of her experiences, both as a young child and as a teenager, how she lived through and came to understand the complexities of racial issues of the times.  Her life required considerable courage.  With the passing of the Civil Rights Act in 1964, her father spoke to her about which child in the family might be the best one to begin integrating the schools.  Elsie, about to begin high school, volunteered to go.  It was a “tag, you’re it” kind of moment.  Changes in the law required follow-up action.  Elsie, with encouragement from her father, tagged herself to be one of the many children who changed the course of American history.

Listening to Elsie speak and gracefully field questions from her young audience (even the ones about how old she is), I felt another moment of being “tagged.”  This time it was all of us at the Seed, both teachers and students.  We were given the gift of her stories, and now it’s our turn to make them life lessons and pass on the wisdom to the next generation.  It  is simultaneously an honor and a daunting task.  Yes, we’ve made progress with human rights, and there’s still so much more to do.

Later in the day, after Elsie left the Seed to return to her ASU job, I read a blog post written by my friend, Rebecca Masterson (http://sincerelybecca.com/2015/01/21/whats-up-time-wanna-race/).  She has a young son with autism.  In her post she wrote about the race with time she and other parents face, helping their children cope with anxiety in healthy ways before they are too big to manage.  She described a scene at her son’s school with a larger student during drop-off who had reached that stage.  She wrote that she waved at the father afterwards, letting him know she understood.  I shared her post and soon heartfelt messages appeared saying they would wave, too, and continue to wave.  My daughter wrote:  “Our family will always wave.  We don’t only wave. We stop to chat, lend a hand, love on your kids…because we love you and all the kids we come in contact with.”  Sounds like another round of “tag, you’re it,” and I feel privileged to be a part of the action.