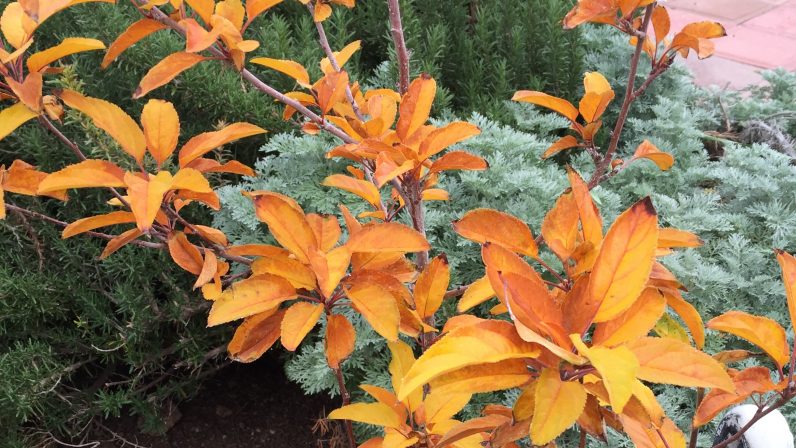 Each In Our Own Time

About five years ago, unbeknownst to me, my granddaughter planted a seed from her apple in our garden.  When it sprouted, I wasn’t sure what it was until I noticed the leaf on an apple I was about to eat.  As it grew bigger, I transplanted it to a safer place.  The first time it lost its leaves, I thought it had died.  We left it in the ground just in case and in the spring buds formed on the thin branches.  Her apple tree continues to thrive in our yard, each spring growing a new crop of leaves.  It has yet to produce an apple, though.

Nevertheless, I don’t mind that it hasn’t grown any apples.  It’s provided other fruits, mostly in the form of non-edible bits of wisdom.  I noticed a few weeks ago that all the leaves on her tree were still a dark green, even though many of the surrounding ones were already losing theirs.  I even commented to Bill that her tree seems to be on its own timeline, and the timeline has changed over the years.  As everything else around it transitioned from autumn to Arizona’s version of winter, Grace’s tree seemed to be living in an almost timeless dimension.   Its greenery looked like it might last forever.

Then, on Sunday morning as I stepped out to check the garden, my eyes received quite a surprise.  The lovely green leaves were miraculously golden.  The apple tree, in its own time, had joined the rest of us in the grand cycle of life.  It made me think how each of us has our own timing as we move through life.  Some parts move slowly and others speed up.  We aren’t always on the same schedule as others around us and if we’re true to ourselves, it’s a process that is uniquely our own.

During this first month of a new calendar year, as a school we are preparing for our summer program and the coming school year.  We have to think ahead as we are also in the present cycle.  It’s a time of year when beginnings and endings have more meaning than usual.  The late Irish poet, John O’Donohue, said this of beginnings:  “Beginnings often frighten us because they seem like lonely voyages into the unknown. Yet, in truth, no beginning is empty or isolated. We seem to think that beginning is setting out from a lonely point along some line of direction into the unknown. This is not the case. Shelter and energy come alive when a beginning is embraced…We are never as alone in our beginnings as it might seem at the time. A beginning is ultimately an invitation to open toward the gifts and growth that are stored up for us.”  What seemed like an ending for Grace’s tree was, in fact, the beginning of a whole new cycle.  This is true for all of us as we go forth into our days, each in our own time.

One thought on “Each In Our Own Time”