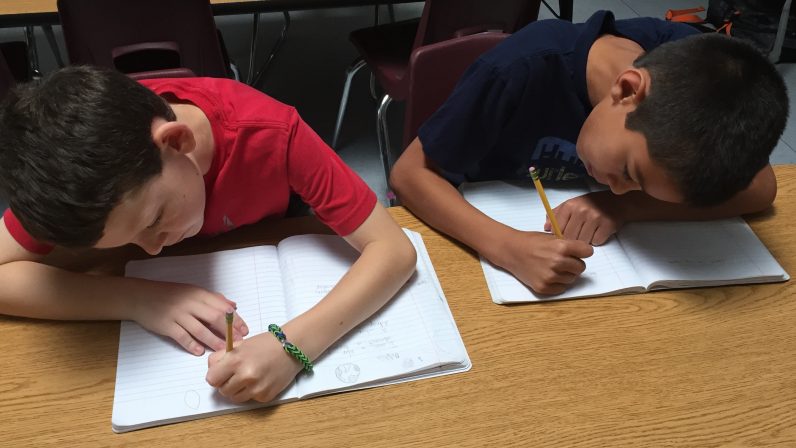 We write, too.  With all the recent buzz over STEAM, it  could be easy to overlook the excellent writing going on here at the Seed.  We have first and second graders writing persuasive letters.  One of the second graders wrote a letter to Bill requesting a zip line at the Seed:  “I think we should have zip lines in our outside area.  If we install zip lines, more kids will want to come to our school.  I believe this because a lot of kids I know like zip lines.  It would give us more to do outside and you wouldn’t have to buy so many supplies.  I know you worry about safety so in order to keep everyone safe, the zip lines can have seats and we will put mats under us.  I know a lot of kids would agree that we should have zip lines.”  After signing her name, she added, “P. S.  Pretty please, at least one?”

This week during a lesson about simile and metaphor, one of the third graders shared his metaphor about night:  “Night is a version of light but instead is all out.  The sky turns dark.  And the whole world goes black.  No one can see because it’s so dark.  People look for their families.  Some are lost, gone in the dark.”  My jaw dropped on this one.  In the last couple weeks I’ve seen signs of significant growth in this group that started out as fledgling poets.   They are among many young poets I’ve taught during my teaching career.

Two of those young poets, one in high school, the other a graduate of Duke University, have resurfaced through messages from their parents.  The high school student, Shelby Weathers, was chosen to represent her school in a weekend regional Poetry Out Loud spoken word competition.  The college graduate, Alyssa Wong, is a writer and editor living in New York.  Her short story, “The Fisher Queen,” was just announced by The Science Fiction and Fantasy Writers of America as a nominee for the 2014 Nebula Awards (http://www.sfwa.org/2015/02/2014-nebula-awards-nominees-announced/).  It’s quite a story (FYI, it contains adult themes and language, not for kids).  In the email from her dad, he added, “Isn’t it amazing that the creativity that the Seed inspired a short time ago has come to fruition?”  I couldn’t agree more.

While searching through my Seed poetry archives, I found a poem Alyssa wrote in second grade.  Already, at age seven, she had the touch.  I’m certain she will not be alone among future writers from our school whose Seed roots travel far and deep.  Here is her poem, “The Secret Partners”: