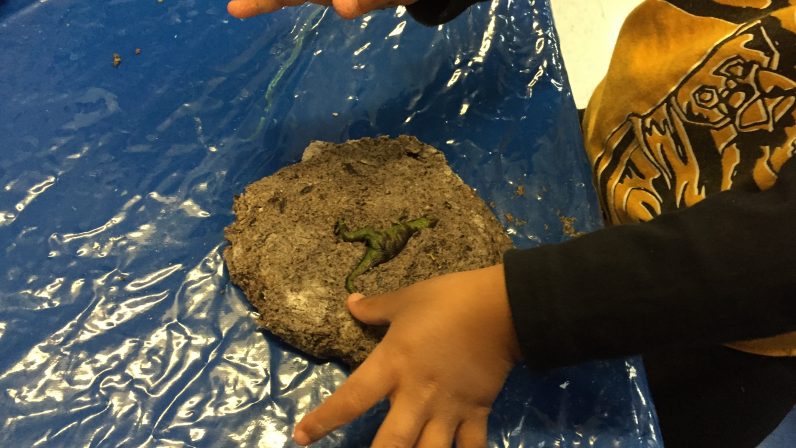 Inside a Dinosaur Egg

Today is my dad’s 90th birthday.  I’ve been thinking about the full life he’s had and is still having.  On the phone this morning he described his recent project of clearing out several dead trees in the town where he lives.  It involved a ladder.  It’s ladders and trees that keep him young.  On the other end of the age spectrum are our Seed toddlers.  In the early months of their school lives, their days are full of invitations to explore and experience the world around them.   As I walked past the Toddler 1s Monday morning, lively Spanish music filled the room.  Singing and dancing followed.  Later, I caught a quick conversation in the kitchen with Jenny, the Toddler 2s teacher, who was scooping flour and salt into a bin to take back to the classroom.  “We’re making dinosaur eggs today,” she said casually.  I made a mental note to drop by their class later to check out the developing dinosaur eggs.

Ever since our Invention Convention, the toddlers have been on my mind.  During the event, several parents commented how impressed they were that even the toddlers were a part of our STEAM curriculum.  Around the Seed, it’s not “even the toddlers”; the toddlers are an integral part of the whole program.  We uphold the same standards and integrity for our toddler classes as we do for the preschool and elementary groups.    Toddler teachers are dedicated, reflective practitioners who spend considerable time each week planning activities and lessons that will extend their students in all directions.  They utilize the STEAM curriculum and other dimensions of their students’ school experience  to help them step into their highest potential.  Their work sets the foundation upon which the rest of the curriculum resides.  The toddlers’ studies of what hands do, how air moves in and through our lives and how primary colors come together to become a rainbow of possibilities open the door to everything else they will learn as they grow older.  These experiences, and the curiosity they inspire, set the stage for the children to become lifelong learners.

When I returned to the Toddler 2s for an update on the dinosaur eggs, a group of children was called to the art table to make their “eggs.”  Each child sat down to a plastic dinosaur and a small mound of a dirt-sand-flour-salt-and-water mixture.  The idea was to form an “egg” around the dinosaur, which would be baked and later cracked open by the future archeologist.  Another brilliant idea from a creative teacher who understands the importance of adventure in toddler learning.  Like the small plastic dinosaurs eventually emerging from inside their protective coverings, our toddlers’ minds are opening with curiosity to the wonders of the world that awaits them.  Their teachers are simultaneously witnesses and instigators of the process.