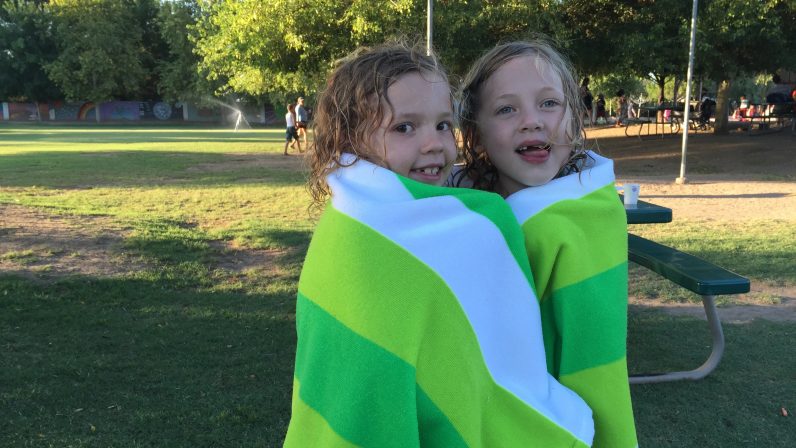 Wrapping It All Up

It was the sweetest and saddest of days all wrapped into one.  Even the weather cooperated by giving us a mildly breezy and not-too-hot evening for our family party on Wednesday.  Starting right at 9:00, toddler teachers handed out individual awards to our youngest Seeds as proud parents looked on.  In some classes, slideshows of the year were shown during the awards ceremony.  Busy with graduation practice and last minute tasks, I only caught glimpses of the morning ceremonies through the windows.  I did, however, get in on the afternoon awards.

I witnessed several proud kindergarteners, sitting on the bench between their teachers, listening to their teacher’s thoughtful assessment of their strengths and accomplishments of the year.  Then as the teacher showed a small poster with a photo of the child holding up an earth, we heard the list of what classmates thought of each child.  The fullness of their year in kindergarten was prevalent everywhere in the room.  Next door in the 1st/2nd grade class where Becky was conducting her last awards ceremony of her long teaching career, I walked in on a sweet song sung in Spanish to their teacher.   Becky quietly and thoughtfully continued the ceremony by reading these lines from Robert Frost’s poem “The Road Not Taken”:

“I shall be telling this with a sigh
Somewhere ages and ages hence:
Two roads diverged in a wood, and I—
I took the one less traveled by,
And that has made all the difference.”

Becky spoke briefly about her choice to depart from the more traditional path of teaching in which she was trained to come to the Seed.  She said what a difference it made in her life, and as she gave each child their award, it was clear how much of a difference she’s made in their lives.  She was gracious and honoring of each child she’d carefully nurtured for a year or two.  It was obvious how much she is loved.

Finally it was time for graduation.  We graduate all of the 3rd/4th graders, even though many of them return the next year.  Lined up in their new graduation shirts, they sang three songs, including a lively rendition of a Rosanne Cash song, “Land of Dreams,” that included an instrumental accompaniment by the kids.  We were all mostly cheerful until the last child tearfully received his diploma, and then a flood of tears burst forth throughout the room.  When graduation was over, I thanked everyone for coming and said they could take pictures if they wanted.  No one moved.  In that stillness, one of the dads, who himself has volunteered countless hours of his time to the Seed board of directors, stood up and offered heartfelt words of appreciation for the school and the people who have created it over many years.  It was a moment suspended in time that felt like pure grace.

The day was topped off by a lovely evening of food, casual conversations and kids running around in their bathing suits, soaking up a few hours of freedom at the end of their school year.  Toward the end, how I felt about the day was perfectly expressed by two girls huddled together in one cozy towel—grinning, wrapped in the warmth of friendship that began at the Seed.