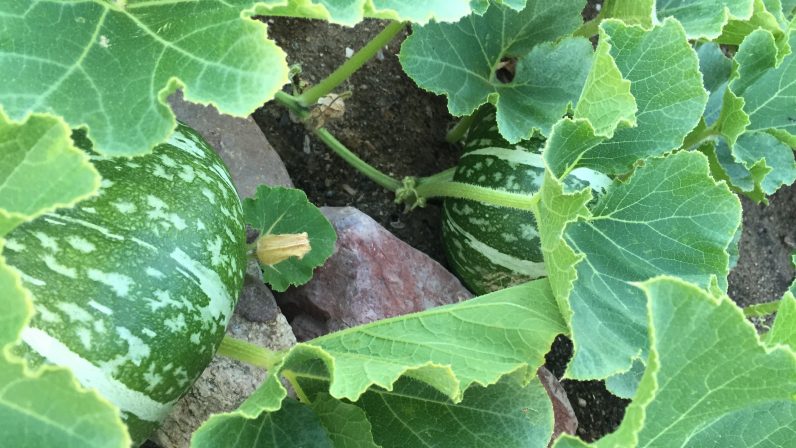 Hidden in the Vines

In the early spring I planted a modest patch of Hopi blue corn.  Usually generous with the birds, I kept the seedlings covered till I was certain they were too large to be yanked out of the ground, roots and all, by our winged friends.  There was ample space for the corn in a larger bed shared by three newly planted peach trees, as well as our compost.  To say I was a bit overprotective of my corn plants is an understatement.  As the shoots grew stronger by the day, I noticed some extremely healthy looking leaves emerging in the compost from a spot near the water source.  I could tell they were squash, and there were lots of them.  I let the squash sprouts grow for awhile just to see what would happen.  Eventually, I thinned out about half of them, knowing fully that they’d take over the corn patch if I allowed it.  I considered removing all of the squash because I doubted they would grow very well in the summer.  Yet something told me I should let a few grow.

As they grew, I noticed several small round squash forming on the vines.  I trimmed off the ends of the vines so the plant would direct all its growth toward the squash instead of the leaves.  I also cut back anything that might remotely infringe on the corn patch.  Some of the tiny squash shriveled up after a few days, so I figured they would all do that.  Then one day I noticed two rather large and  healthy kabocha squash (sometimes referred to as Japanese pumpkins) hiding in the vines.  One was growing right on the rock border of the garden bed.  They are both still growing larger by the day and I look forward to cooking their delicious bright yellowish-orange flesh into something tasty.

I think of these two kabocha squash  as gifts.  They came forth without any effort or intention on my part.  For whatever reason, they were meant to grow in our garden.  The kabocha squash, one of my favorite varieties, came into my life like other pleasant experiences do.  It’s easy to receive and embrace the positives that arise, like the two beautiful squash.  It’s learning to embrace the harder events, however, that offer growth we might not otherwise encounter.  Each day as I begin anew, I practice being grateful for everything that “grows in my garden,” cultivating appreciation for all the gifts hidden in the vines of my life.