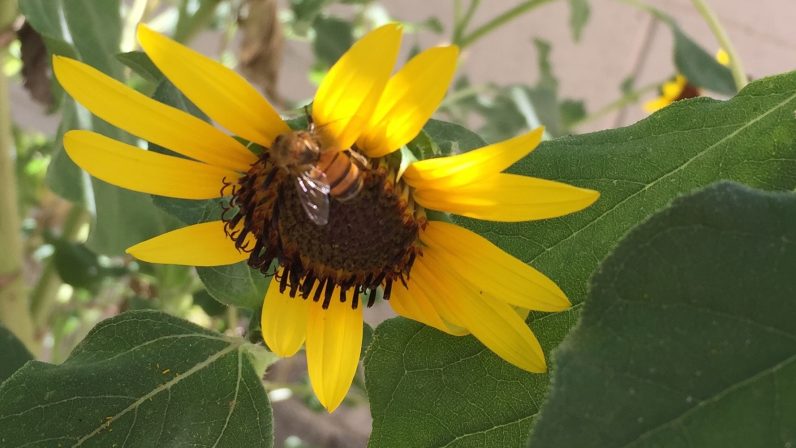 Two weeks ago it was snakes, now it’s bees.  On Saturday, Bill received a notice from the Smiley Honey Company in the Florida panhandle. It’s the company where he’s bought tupelo honey for years.  The notice said their 2015 supply was wiped out due to bad weather (http://www.mypanhandle.com/news/tupelo-honey-supply-diminished-due-to-weather).  When he first mentioned it, my first thought was that it was caused by collapsing colony disorder (CCD) or the growing number of pesticides, viruses, and parasites affecting bees.  The next morning while driving, I heard the tail end of Marla Spivak’s inspiring TED talk about bees, which confirmed many of the concerns I’ve had for some time (http://www.ted.com/talks/marla_spivak_why_bees_are_disappearing?language=en).  Although there were grim facts and stories, her talk also left me with a feeling of hope.  Marla suggested one way we could help the bees is to plant flowers.

I perked up when I heard this.  Being the eternal optimist and always on the lookout for tangible ways to show children how they can directly help the planet, it seemed like a perfect idea for the Seed.   Additionally, it ties in with our approaching all-school nutrition study.  Marla reminded us that a third of our foods are dependent on pollinators and included a visual of how empty our produce sections would be minus these foods.  Who better than the Seed family to accept this invitation to help the bees?

While I was on the Smiley Honey website, I noticed another blog post that caught my eye.  It was about the surprising increase in the number of honey bees (http://www.washingtonpost.com/news/wonkblog/wp/2015/07/23/call-off-the-bee-pocalypse-u-s-honeybee-colonies-hit-a-20-year-high/).  I researched this further and discovered that a primary reason for the increase is innovative practices of beekeepers globally to protect and multiply their colonies.

In the coming weeks, as we immerse ourselves fully in our study of food, part of our attention will turn to planting flowers that promote pollination.  We will talk about why it’s important to do so for our own nutrition and quality of life.  We’ll also plant flowers in support of the bees and beekeepers who, around the world, are holding onto something incredibly precious to all of us.  Wendell Berry once said, “It’s mighty hard right now to think of anything that’s precious that isn’t endangered.   There are no sacred and unsacred places; there are only sacred and desecrated places. My belief is that the world and our life in it are conditional gifts.  We have the world to live in on the condition that we will take good care of it. And to take good care of it we have to know it. And to know it and to be willing to take care of it, we have to love it.”  (http://billmoyers.com/segment/wendell-berry-on-his-hopes-for-humanity/)

It’s yet another way the Seed will help to heal the planet.