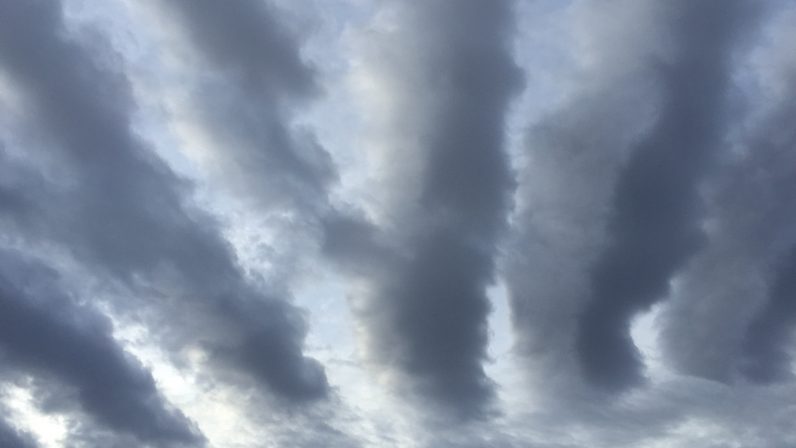 It’s hard for me to wrap my mind around the idea that we’re in middle of our third week of school and it’s still August.  It seems like every year summer is cut shorter and shorter.  As a child, summers always meant freedom and time for wonder.  It seems like we all have less and less of that.  Still, I’ve learned to seize the tiny moments when freedom and wonder are available.  I have to thank the weather this time of year for a number of those moments.

The clouds early Tuesday morning provided one such experience.  Just as I was about to cross the small bridge to the other side of the canal, I glanced up and noticed these beauties.  I pulled out my camera, knowing I only had a minute or two before they’d take some other form or disappear.  The clouds were expansive flashes of wonder and all thoughts occupying my mind vanished as quickly as the clouds.  They felt like a gift, to help with the transition from summer to fall, and a way to shift my perspective on a few things.

I was reminded of a recent interview with Rex Jung, a neuropsychologist who studies the interplay of intelligence and creativity (http://www.onbeing.org/program/rex-jung-creativity-and-the-everyday-brain/1879).  He speaks of intelligence as a “superhighway in the brain that allows you to get from Point A to Point B.”  He continues by describing creativity as “a slower, more meandering process where you want to take the side roads and even the dirt roads to get there, to put the ideas together.”  Further into the interview he discusses “down time where your brain is not engaged in ongoing cognitive activity…[that] induces this work space for you to meander around and put ideas together.”  He explains that different people do different activities (e.g. running, playing sports, yoga, taking a shower, recess) to create down time, and creative people, in particular, know ways to make this space in their lives.  Then he adds this about children:  “For your children…that’s an important space to cultivate, that recess from knowledge acquisition. You have to have the raw materials in place to put together, but you also have to have the time to put them together.”

Last week I was talking with one of our preschool parents about this very thing as we discussed the upcoming weekend.  She said she was going to let her kids stay in their pajamas as long as they wanted and not worry about all of the everyday rushing around tasks they have to do on a school day.  Walking each morning, looking at clouds, making art, and practicing yoga all give my mind time and space to activate its creativity.  As grown-ups, we owe it to the children in our lives to give them more open, unscheduled time, to wonder and put their ideas together in new ways, too.  I vote for more mornings of pajamas, cloud watching, and meandering dirt roads.