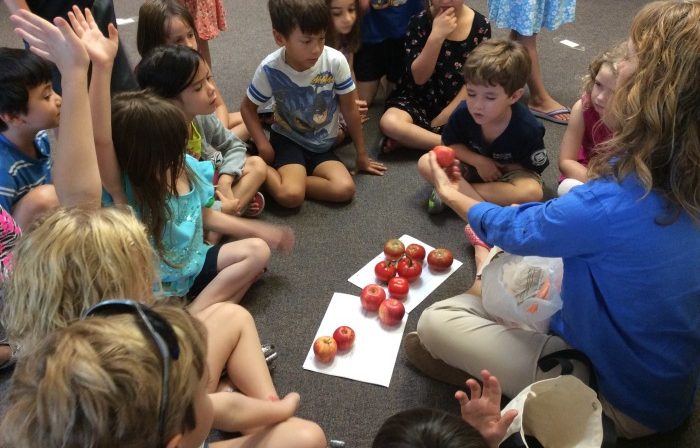 I’ve thought about the lead teachers quite a bit this week.  It’s one of the most demanding times of year for them, given they are preparing their progress reports AND teaching their classes.  Considerable thought goes into these reports, especially the narratives, which are reflections on the whole child.  They paint a picture of the child with words and the intention is to write in a way that what is written could only describe that particular child.  Like each child, each narrative is unique.  This work takes time and a significant amount of dedication to the kind of teaching we offer at the Seed.

During the same time the teachers have been composing their narratives, I had the  opportunity to listen to an interview of Mary Catherine Bateson, the daughter of the great anthropologist, Margaret Mead (http://www.onbeing.org/program/mary-catherine-bateson-composing-a-life/7968)  Mary Catherine Bateson is the author of Composing A Life, a pivotal book in my own journey.  She shared numerous stories about her famous mother’s life and work, including her progressive views on childrearing.  She also introduced me to the term “evolutionary clusters.”  When asked what it meant, this was Dr. Bateson’s explanation:  “Well, you’ve probably seen the slogan that gets quoted all the time, ‘Never doubt that a small group of thoughtful, committed citizens can change the world.’ ”  She verified that it was a Margaret Mead quote and went on to fill in her explanation:  “Very often, major accelerations of change came out when a group of people got together and learned together and dared to think new thoughts and then pass them on…It was true of the American Revolution, a group of thoughtful colonists thinking, actually, about French philosophy, mainly, and deciding they wanted to be independent. And the point is that the evolutionary part of that was in the relationships between the members of those small groups…[It was] a feeding off of each other’s imaginations and insights and wisdom and then spreading them out in the society going forward.”

I listened to this part of the interview several times just to make sure I understood it.  I thought of the teachers and their narratives, the level of care and attention that goes into them.  Their innovative classrooms and imaginative teaching practices that play off each other’s ideas all came to mind. I also thought of our growing alumni population now moving into adulthood, who are integrating the Seed approach into their daily lives as parents, teachers, coaches, and an array of professions.

In the uncut version of the interview with Dr. Bateson, she talked about the importance of the relationship between children and their elders, both for their own sake and for the planet’s well being.  She described how children, when taught about recycling, conserving water, and turning off the lights are the messengers for the future by reminding the adults in their life what the planet needs for survival.  Between the teachers, our alumni, and current crop of Seeds, I think we’re a fairly successful “evolutionary cluster,” doing our best to be thoughtful citizens changing the world.