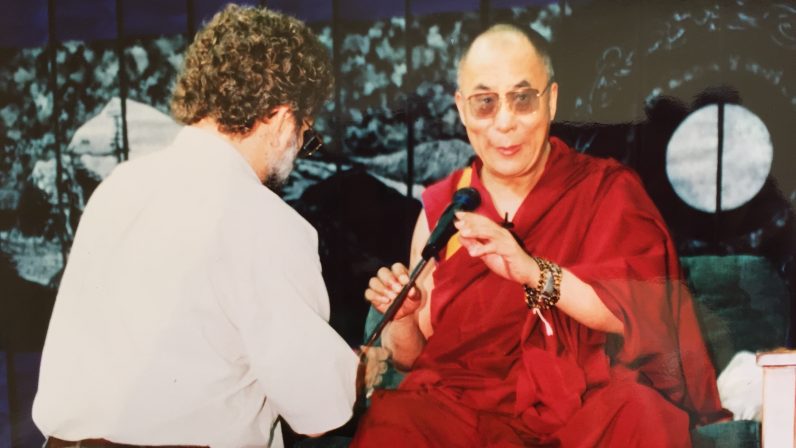 Bill will be 70 on Saturday.  I’ve known him for 42 years and wonder where the time has gone.  We began as friends in 1973 and that friendship has evolved into a lifetime of growing a family that includes the Seed.  Many parts of our lives have evolved, especially the addition of daughters and grandchildren, yet some aspects have not changed at all.

In 2010, in celebration of Bill’s 65th birthday, I wrote about our seamless life together (https://www.awakeningseedschool.org/2010/11/a-seamless-life/).  By seamless I meant a life that fully integrates work, spirituality, and personal experience.  In rereading that post, I can see that we’ve helped each other live seamlessly because we’ve supported the other’s journey while traveling our own.  Personally, I am still a work in progress when it comes to service.  I can say, however, that Bill has mastered the practice.  In recent years he’s taken to calling himself the Butler, and I see accuracy in that designation.

Bill has done many things in his 70 years.  He scooped ice cream at Baskin-Robbins as a teenager, worked in food service, managed a car wash, worked construction, ran his own businesses, and took his current job at the Seed “just for a couple weeks” in 1987 till we found someone permanent.  He was entrusted with priceless native American artifacts while hanging displays at the historic El Tovar Hotel on the South Rim of the Grand Canyon.  Over several years, Bill traveled to sacred Hopi sites in Arizona, New Mexico, Utah, and Mexico with the late White Bear Fredericks to document Hopi history.  He was also the Arizona logistics director for Hands Across America and assisted with Native Hands Across American in New Mexico.  Bill worked on logistics for the last two Arizona visits of His Holiness the Dalai Lama.  On one visit he was given the task of attaching the mike to the Dalai Lama’s robe before each talk.

In more recent years, Bill the Butler has expanded his service work to incorporate our grandchildren’s activities.  He accompanies them on school field trips, personally finances classroom projects, and offers transportation when no one else is available.  When out in the world, Bill keeps his eyes open for people in need and randomly pays their checks at restaurants and feeds homeless people.  He made friends with the young man who fits his glasses and gave him a gift for his new baby.  Bill knows people everywhere and goes out of his way to bring ease to their lives when he can.  All of this from the guy who we see handling Seed finances and mowing the grass.

Bill will be the last person to tell you what he does to serve others.  I guess what I’m trying to say is there’s a lot more to this 70-year-old butler than meets the eye (or ear, if you’ve been privy to his storytelling).  The Seed, and the world, would not be what they are without the presence of this generous-hearted man.  I hope you’ll help celebrate his birthday by sending him an email: b.glover.az@mac.com  What a blessing it is to have our own butler living among us, modeling stewardship wherever he goes.