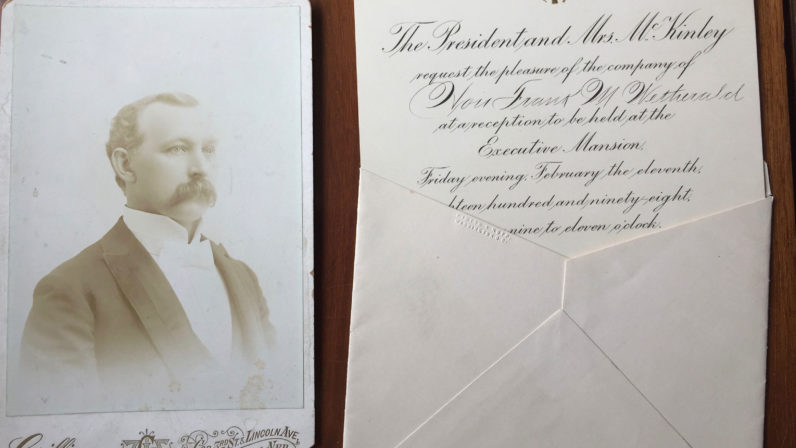 It’s snowing this morning in rural Nebraska as I think of my friends, family, and colleagues in Arizona warming up to 90 degree temperatures.  I’m here checking in on my parents for a few days.  Each time I return to the town where I grew up it’s a dip into my ancestral archives.  Sometimes it occurs through the land, standing on soil that nurtured my childhood.  Other times it’s through stories, like the one my mom told about her mother’s sewing talents.  She described her experience as a girl, stepping off of a train in a new dress her mother had sewn, or almost sewn.  The sleeves were evidently basted on but not thoroughly sewn.  As the train journey came to an end, her sleeves were literally hanging by a thread.  On this trip, the archives were photos, newsletters, and three truly remarkable autograph books.

My mother brought out a green metal box containing the autograph books.  Two of them belonged to my great grandmother, Ivy Green Wetherald, and her sister Lizzy.  In each book was a page autographed by Elizabeth Cady Stanton, a prominent leader of the Women’s Suffrage Movement in the mid-1800s.  Evidently, Hebron, Nebraska, was quite involved in the movement.  According to the Thayer County Museum Muse by the Thayer County Historical Society, “the first ‘permanent’ Woman’s Suffrage Association Meeting in the State of Nebraska was held in Hebron.”  Lizzy and Ivy weren’t the only family members interested in political activism.

In another box I found photos and newspaper clippings also from my dad’s side of the family.  There were beautiful portraits of my grandmother posed with her toys, many of them dolls.  None of her siblings survived infancy, so she was essentially an only child.  I could see from the photo that her dolls were likely silent replacements for her missing siblings.  There was an envelope in the box that held an invitation from U. S. President William McKinley.  It was sent to my great grandfather, Frank Wetherald, (Ivy’s husband and my grandmother’s father) inviting him to attend a reception at the executive mansion in Washington in 1898.  Frank was a delegate to the St. Louis Republican Convention in 1896, at which McKinley won the nomination.  In addition to his interest in politics, Frank was an entrepreneur.  He partnered with his brother in starting a mill along the local Little Blue River and established a bank in 1874 (which is still in our family).

I’ve always been fascinated by influences in a child’s life that contribute to future interests.  This trip has brought forth questions, particularly about the creatives, activists, and innovators in my family history.  My mom’s beautiful quilts and my dad’s intricate model train setup certainly reveal creative threads that have become a part of me.  Learning about my ancestors in the 1800s rendered an understanding of how a small town Nebraska girl could move to the desert to start a school.