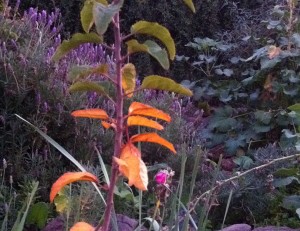 On the Sunday afternoon nearly two years ago that the Arizona Cardinals miraculously played for their chance of a lifetime to appear in the Super Bowl, I let my grandchildren loose in the garden with packets of seeds.  For the next month, all sorts of sprouts shot up in random locations.  I thoroughly enjoyed seeing what popped up and where.  Since I supplied the seed packets, I knew what the seedlings looked like and easily identified them all, except for one.  Week after week, I observed the unfamiliar plant happily rooted to the earth near the rocks at the garden’s edge.  I kept studying the sprout, and although it seemed like I’d seen similar leaves before, its identity escaped me.  Then one day while peeling an apple with a leaf on its stem, the mystery was solved.  Grace, nearly five, had buried the seeds of her apple in the ground along with the packet seeds.  As spring moved forward into summer, it kept growing and I decided the only way it would have a chance to survive the heat was in a shadier spot.  I took a risk and transplanted it.

Surprisingly, her little tree made it through the summer.  I breathed a sigh of relief when fall arrived, then felt disheartened one morning to see that all its leaves had dropped to the ground.  It was nothing more than a bare dead-looking stick, standing in the dirt.  I came so close to pulling it out during one of my “pruning” moments, but held off remembering that some trees actually do lose their leaves in the fall.

Sure enough, with spring came tiny green buds that formed into new leaves.  Grace’s apple tree survived another summer and now stands nearly three feet tall.  It towers over the statue of St. Francis that once guarded it like a wise older brother.  The tree’s lower leaves recently turned a golden yellow before releasing to the ground.  The upper leaves remain green and strong, not looking like they’ll give in to the winter season any time soon.

A few days ago, Grace’s three-year-old sister asked how Grace’s “pineapple tree” was doing.  Deciding to say “fine” instead of launching into an explanation about how pineapples grow on low bushes in warm, moist climates, I chuckled at her question.  In some respects, the likelihood of Grace’s apple tree surviving to this point, given its history, isn’t too far from that of a pineapple growing in our garden.  Then again, that’s the way life is.  I, for one, am grateful for this little tree’s lessons: to stay open to the surprises that come into our lives, and not give up on something or someone, even if they appear to be absent or lacking in some way.  I’m not holding my breath for juicy apples, but at this point, anything is possible.