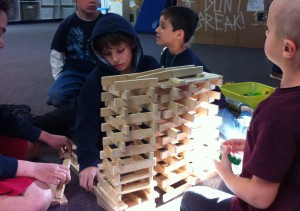 Between 7:30 a.m. when the school opens, and 8:00 when it’s time to go out to the playground, there is serious block building going on in the Seed’s multipurpose room.  It’s just a few children, the early birds, and they usually end up in a spot on the floor where the morning sun lights up  their constructions.  I love to watch them carefully add to their daily creations, pushing the limits of balance with just one more narrow wooden block.  Eventually one more is one too many and both the builders and bystanders squeal with delight as the tower tumbles.  Then they start over, revising their previous plan to make it higher and more complex.

It’s always intrigued me how these play rituals are started.  One child comes up with an idea and soon there’s a wildfire of fervored followers attempting repeat performances.  It often happens within a classroom of age peers, and I find it even more fascinating between children of different ages.  The morning block builders are as young as three and as old as nine.  The oldest have been Seed students since they were the age of the youngest and understand what it means to look up to the big kids.  It’s heartwarming to see this blend of more experienced students taking on the role of teacher with their younger friends.  For those who remain at the Seed through the elementary grades, it’s a chance to give back for all they’ve received over the years.  Whether it’s building blocks, making art or enjoying dramatic play, there’s always something creative being passed along to the next generation.

Multi-age group relationships are not without their challenges, though.  A few days ago I was moving some large boxes around that the children had been using to build a big fort.  Inscribed among the layers of tape used to hold the fort together were these words:  BIG KIDS ONLY!  NO LITTLE KIDS!  My heart skipped a beat when I saw it, especially in light of our recent discussions about the downfalls of exclusion.  My first reaction was to find out who was responsible and make sure it never happened again.  As I began asking questions, though, a story unfolded and it was apparent that several solutions had been attempted to try to solve problems that arose during construction.  Talking to both children and the adults who were supervising them, I could see an opportunity for learning.  We discussed options, came up with a plan, and moved forward without blame or finger pointing.  It was a lesson for me as well.

Our practice as teachers is just that, a practice.  There’s always something new to learn, and something else to learn about what we already know.  Each time we approach a situation we have a chance to revise it, just like the morning block builders.  Sometimes the blocks tumble when things are out of balance.  We learn day after day to pick the blocks up, take in the lesson of the moment, and return to our work with renewed inspiration.