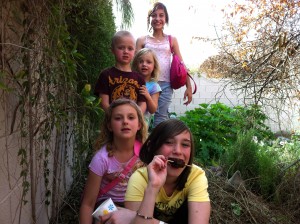 I used to think time flew when my girls were young.  Now that I have grandchildren, it’s moved into warp speed.  On Saturday I had another glimpse of this phenomenon.  Generally, it’s rare for us to have all five of them at our house at the same time.  They usually come alone or in pairs for visits and time in the garden.  This gives each of them a break from their daily family life and us a chance to be fully present to each one individually.  On Saturday, however, they all showed up.  Ranging from three to nearly fourteen, we had the full gamut of developmental stages and imaginative possibilities.

Despite the beautiful almost-spring afternoon, at first the older ones wanted to play inside.  Holed up in the back bedroom, lights on and window shades shut tightly, they were deeply involved in a game of school.  The younger ones were eager to get out to the mud, but after awhile even they were lured indoors by the possibility of time on the iPad.  Finally, after my mandate of just one hour in the garden, they all migrated to the back yard, some with props, others empty handed.  The first half hour or so was a process of adjusting to each other and their surroundings.  There was no shortage of arguments about whose turn it was on the hose, discussions about why it’s not a good idea to run with hedge cutters in hand, and how-to-treat-your-sibling reminders.  The energy was chaotic at best and I had my doubts about them being able to pull together their “magic” to make something fun happen.  As they worked it out, I kept pulling weeds and tending to mindless garden tasks.  Everything shifted about the time they discovered the juicy pea pods, which they consumed quickly and then moved on to their plan for an “expedition.”

Along the back wall there’s a vine growing over the top from the neighbors‘ yard.  There’s also a trellis on our side with a vine that didn’t survive the last frost, so it’s all dried up and brittle.  The pathway between the wall and the trellis has a jungly effect, which made a perfect trail for the expedition.  After minimal path clearing, the group completed its complex organizational procedures and set off for their adventure.  For the next half hour they climbed over unstable rocks,   pushed aside low hanging branches, offering each other snacks, and implemented mud slide rescue maneuvers.  I stayed out of the way, enjoying the unfolding excursion.  I don’t know how much longer the tendrils of adolescence will allow time for involvement in this sort of play, but I was happy that for at least one more Saturday afternoon, the magic was still there for all five.