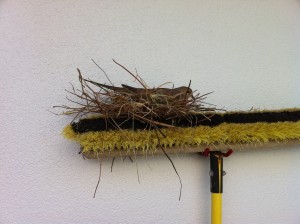 In the rural Nebraska town where I grew up, May 1st was always a memorable day.  We called it May Basket Day because we made little baskets out of paper and doilies, stuffed them with flowers, popcorn, and candy, then delivered them to the doorsteps of our friends.  We’d set the basket on the doorstep, ring the doorbell, and run before the intended recipient could catch us.  I deliberately took my time at the house of the boy I had a crush on each year.  I always associate May 1st with lilacs, too, because we had a huge fragrant bush separating our yard from the  neighbors’, and it was lilacs that often filled the May baskets.

It was a sweet tradition in a place that was mostly safe and predictable.  Kids around here don’t deliver May baskets, and I can see why.  It would be hard to keep this tradition alive in a place that is so spread out, even with modern day GPS.  What made it work was the small town, knowing everyone, and the close proximity of the houses where we made our deliveries.  Living in an urban area, we have to find other ways to find these safe pockets of familiarity.

Over the years, the Seed has become such a haven.  On September 11, 2001, a number of parents said later that they decided to come to the Seed that day because it made them feel safe.  Even though it was a day of huge uncertainty, they wanted to be where they knew people, where they belonged and felt part of a community.  Sometimes reminders of the Seed as a safe place come from non-humans.  Last week a bird was the messenger.

On a push broom hanging on the wall of our toddler playground, a dove built its nest.  Anyone who has spent time near the toddler playground knows it’s a busy place, and not necessarily quiet.  Safety is undoubtedly the number one priority, but not the kind that is usually extended to birds.  Nevertheless, it was the spot this particular bird chose, just a few feet away from the congested area that bridges indoor and outdoor life at the Seed.  In addition to feeling safe enough to nest on a broom in the toddler playground, this bird has no qualms about someone with a camera zooming in for a photo.  I hope she’ll continue to feel peaceful and safe long enough for her young to hatch.  She is, after all, a dove.

This year no May basket was delivered to my door; only the news that Osama bin Laden is dead.  To many this man has become a symbol of that which makes our world an unsafe place.  What I feel in response to this news is sadness and compassion for our entire planet, for all of the suffering brought about by killing and hatred.  My prayers in the coming days will be for world peace and for healing.  And may the Seed continue to be a safe haven for humans, birds, and all living creatures.