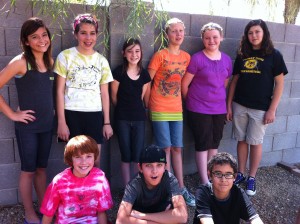 The quail perched on the block wall wasn’t just resting, he was on guard duty.  I realized this moments after I caught my first glimpse.   Right below, among the rocks and desert plants, his mate scurried along the base of the wall with a brood of babies in tow.  I tried to get closer but they remained well hidden.  I can only imagine what important lessons the mother bird  conveyed in the depths of those bushes.  Another successful crop of youngsters to carry on quail traditions.  We had our own brood of tradition at the Seed during the first week of summer school.

Summer at the Seed is a unique experience.  It’s hot, messy, muddy, and exciting.  Creativity flows in all directions and teachers use the time to try out activities perhaps a bit too involved for the regular school year.  In the summer there’s more camaraderie between age groups and it’s a time when kids who have left to go to other schools come back to be a Seed again.  Thrown into the mix is our intern program.  Over a decade ago, we had a group of children who kept coming back to the Seed, year after year, who eventually grew too old for the program but weren’t old enough to be on staff.  We decided to start a summer intern program for 12 to 15 year olds to accommodate them.  In order to be an intern they had to be a former Seed or obtain special permission.  The idea worked and interns are now an integral part of our summer program.  Our interns run errands, play with the kids, read stories, help open lunch containers, wash tables, and rub backs at nap time.  More than anything, they are role models to the children who idolize them.  They inspire younger kids to want to be interns when they are older, just as previous interns inspired them.

This year’s interns are among the best we’ve ever had.  They are trustworthy, enthusiastic, and eager to help. Last week we had nine and by the end of the summer, we’ll have eleven all together.  It’s encouraging to see such interest in carrying on the summer intern tradition.  As they contribute to the school, they also gain confidence, practice reliability, and develop patience.  They grow as citizens of the planet.

One of our long time interns, now 21, only missed one summer since she was three years old.   Eventually she became a staff member and just this  year finally left the Seed for a prestigious internship with a local company.  She is an extraordinary young woman in her own right and I like to think being a Seed intern merely enhanced her already fine qualities.  Steeped in the Seed tradition, I know that in addition to her years of inspiring younger children, she will continue her ways in the world, inspiring all who are fortunate to know her.  She and our brood of summer interns allow me to envision a brighter future for all of us.