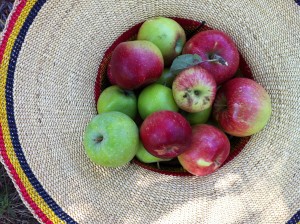 On Friday I stepped onto the playground for duty and was blasted by a hot wind.  In the next moment I thought it won’t be long before a colder wind shivers our bones.  Even with the heat, Friday’s wind was laced with a hint of fall, signaling the change in the air.  I felt that change a month ago in Oak Creek Canyon when we picked apples from the orchard where we were married.  On Friday I felt it again and another apple story I heard over the weekend served as a reminder of why we should savor this and all seasons.  The story came from the husband of one of our former Seed teachers.

In the early 90s I hired a young teacher from Maine right out of college.  Her letter of introduction stood apart from most I’ve received and we connected right away when we first talked on the phone.  Within a few months Abby was on the Seed staff, preparing for her first year of teaching.  Her years at the Seed were remarkable and she had a way of putting a special touch on her classroom work.  One of my favorite memories was the blueberry hats her mom knitted for each of her K-1 students.  Those same kids are in college now and I’m pretty sure some of them still have their blueberry hats.

Abby eventually moved to Tucson and last year moved back to the east coast.  Now living in the DC area, she has three young children.  Her family recently went apple picking to get ready for the Rosh Hashanah holiday.  I am told that the time around the Jewish High Holy Days is one of reflection on the past year and hope for the year ahead.  For Abby’s family, it’s an especially significant season.  Early this summer Abby was diagnosed with cancer.

When we spoke on the phone soon after her diagnosis, she was weighing her options.  Months later she is recovering from surgery and preparing to begin chemo.  Along with the apple picking story, her husband said that next weekend they will cut her hair together as a family among the fall trees in their yard.  They will each sport a knitted hat, once again made by Abby’s mom.  This time, instead of blueberries, each will be a Sesame Street character.  They are being sustained during this challenging time by each other, their family and friends.  I’m happy for this family, a part of the Seed family, that they have each other and are able to enjoy the blessings of this season.  Abby’s story gives perspective to my life and inspires me to face my own challenges with greater dignity and courage.  It also strengthens the sense of connection I feel with Abby and her family, even though they live far away.  I will appreciate autumn this year with her in mind, as well as every Seed family, past, present and future.