Children All Around the World 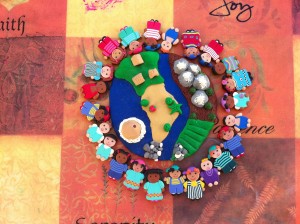 Contrary to what my husband tells his grandchildren, the antique blue trunk my mother painted for me when I was young does not have a snake in it.  Although a snake would be quite interesting, most of the items filling that old trunk are artifacts of my youth:  my old cheerleader uniform, summer camp yearbooks, picture albums from high school when, according to Faith, my youngest granddaughter, I “looked like a boy.”  The trunk also holds remnants of my teaching career and early adulthood, including my husband’s wedding shirt, a miniature model of the earth created by a student from polymer clay, and a framed art piece of several early angel pins I made after my friend’s toddler died of cancer.  When Faith saw the framed angels, called Caitlin’s Cousins, she asked if she could play with them.  I said she couldn’t play with the ones in the frame, but I had a whole bag that were available for play.  She was additionally drawn to the miniature earth, which also left its safe haven in the trunk.

As she dumped the whole pile on the table, I told her the story of Caitlin, how she had cancer when she was a baby, and that she died right after her second birthday.  I went on to explain that after she passed away, we started making little bald angel pins to remember her.  We ended up selling thousands of them all over the world to raise awareness about pediatric cancer and to contribute part of the proceeds to the Caitlin Robb Foundation established in her memory.  Among the bald angel pins was an assortment of others.  The others were pins of regular children of all different colors, sizes, and shapes.  I had made them late in my “polymer clay phase” to try to raise money for the Seed scholarship fund.  They didn’t end up being as popular as the angels, but they were cute and I saved them, thinking someday they would have a purpose.

I left Faith at the table with the pile of pins and earth model to continue my household tasks.  Some time later, she exclaimed, “Look, Mamie.  Children all around the world!”  Sure enough, she arranged them like a halo around the miniature earth.  Her little arrangement of children encircling the world is an image that has represented my life work for many years.  Without prompting, there it was again, assembled from a blue trunk artifact, a bag of pins and a young child’s imagination.  We never know when or how reminders of our life themes will surface.  It’s always gratifying when it happens.