Metaphor in a Bag 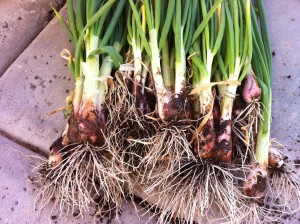 A few years ago our Spanish teacher handed me a bag of onion sets for our garden.  At the time I didn’t know what  was a gift it was that would keep on giving.  I found out later that they are called I’itoi Multiplier Onions and have been grown by the O’odam people in southern Arizona for centuries.  It is believed that they first came to Arizona from Spain via seventeenth century Jesuit priests.  Each set is about the size of my pinkie finger and all you have to do is stick it in the ground and water it.  Within a few weeks there are anywhere from four to eight onions where there used to be only one!  Each time I harvest a small bunch I remove one from the rest and replant it.  These delicious and potent little onions are so prolific that we can go for about six months without having to buy onions.  In addition to our home garden, we now have them sprouting up in many of the school gardens.

The onions came to mind recently in another way when I was in Tucson for a lecture by Robert Thurman, professor of Indo-Tibetan Studies at Columbia University.  At one point in his talk, he explained how important each action is in our lives.  He said, “Each little moment of restraint from causing harm to someone, or compassion shown to another being is a step forward in our planetary evolution.”  In other words, every time we show an act of kindness, it’s like another little onion in the garden multiplying into something nutritious and wonderful.  One act of kindness becomes six or eight, then those each multiply as well.

I think of this each morning standing in the Seed’s front office as children and their parents arrive for the day.  Just the simple act of saying hello makes such a difference in people’s lives.  One of our toddlers says hello like clockwork every single morning.  When I return the greeting, it brings warmth to both of our lives that we carry with us throughout our day.  A preschool student is equally consistent in her greeting as she enters the door, pauses to establish eye contact, and says, “Good morning, Mary.”  These seemingly insignificant actions make a big difference with what we extend out to others.  Like the multiplying onions in a brown paper bag, they hold the potential for enhancing our planetary development, broadening the scope of all things good for all beings.