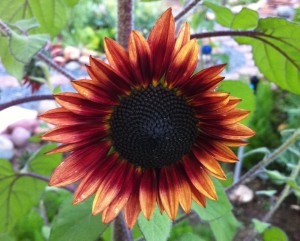 Even though it was hard to come back to school after a week of beautiful spring break weather and a garden full of multi-colored sunflowers, I have to say it’s good to be at the Seed again.  Whenever it rains it always serves as a reminder to pay attention to the moment.  Monday morning’s soggy garden and cloudy sky brought me fully present to our day of returning.  I spent all of last week returning to the spring break I had a year ago, remembering each day as it unfolded in 2011.  It was the week I was diagnosed with breast cancer.

I never thought it would matter that much when I reached this anniversary.  However, as each day followed the next, the memory of that same week a year ago held significance.  In 2011 I spent the weekend before the break at a Circus Yoga workshop.  I learned to face my fears as I allowed others to lift me up and “fly.”  The courage I garnered during those few days came in handy, especially on Tuesday morning when the phone rang.  It was the nurse practitioner from my doctor’s office with these unforgettable words: “We got the results back from your biopsy.  It’s not good.”  Even though I was probably in shock, I managed to make a few calls, line up an appointment with the surgeon, buy an art journal, and begin to wrap my mind around the idea of having cancer.  Right away I started making art, which grounded me throughout the next few weeks‘ process.  On Wednesday I met with the surgeon, which was a huge relief. He assured me I had one of the easiest kinds of cancer to cure.  The surgery date was set and I had a plan.  It made it easier to start telling more people, including my parents and daughter who was on her honeymoon in Hawaii.

By the end of the week I’d met with my radiology oncologist, taken care of pre-op requirements, and begun to set my life in order for the coming weeks.  I lined up coverage for my school responsibilities and my yoga classes.  I made a lot of phone calls and sent out more emails.  The responses I received were overwhelming.  As I continued making art, I was reminded over and over how much I am loved.

A year later, I’m healthy and have practices in place to make sure it stays that way.  People in my life still regularly ask me how I’m doing.  My heart is filled with gratitude for all who have helped me on my path of healing this past year.  My garden thrives, as I do, and I look forward to seeing what blooms next in the ever-changing effusion of life.