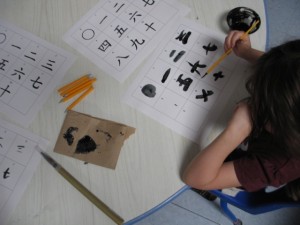 Last Wednesday I was invited to the Preschool 4s class to teach the kids how to do Chinese calligraphy as part of their “cuisine of the world” study.  The calligraphy is one of the random skills I picked up during my ASU days.  I don’t recall exactly why I signed up for Chinese calligraphy but I’m guessing it had to do with expanding my artistic repertoire.  It was an inspiring course and I loved the challenge of trying to duplicate the characters with my left hand.  For those of you unfamiliar with tradition, Chinese calligraphy is strictly a right-handed art form.  It’s not a skill I’ve put to use as much as others I’ve acquired, but I was happy to bring out my brushes and ink stick to demonstrate the little that I remembered.

As each group of four came to the round table where their blank grids for copying the characters awaited them, it was informative to see how each child approached the work.  Some dipped their drippy brushes in and out of the paint quickly with little concern about the drops landing on their papers.  Others were meticulous about removing all extra paint from the brush before attempting to draw the strokes in specific places.  Some strokes were heavy and black with many of the lines bleeding together into a black blob.  A few of the kids switched to smaller brushes and use the paint sparsely.  Their characters had a drier quality and more accurately resembled those on the example sheet.  Some hurried to get back to their play and others took their time, almost in the spirit of an ancient Chinese master meditatively applying each stroke to the page.  While calligraphers worked at the round table, their classmates practiced their characters 2012-American-style using dry erase markers on the white board.

A couple days later, one of the girls was in the office after lunch waiting for her mom to pick her up.  As I walked by, she offered, “Mary, thanks for coming to teach us about calligraphy.”  They were such spontaneous words, right from her heart.  I thanked her for the comment and said I was glad she enjoyed it.

We never know how the lessons we give children will affect them, which ones will matter and which ones won’t.  We also never know how their responses will affect us as their teachers.  This one in particular touched my heart.  I was happy to share a glimpse of something that was at one time important to me.  Perhaps in the future a few of the children will remember our calligraphy day and it will inspire them to pass along  what they love to someone eager to learn.