Fishing for the Big One 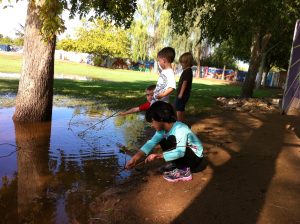 It’s been a big water week around the Seed.  Valley storms transformed our playground from a dry, grassy area to a lakeside recreation spot.  Imaginations have had a heyday as children became sharks feeding on acacia seeds washed into large piles by the rain.  Upside down pots and pans formed a trail through the sand area to magical places.  One of the four-year-olds hauled a long thin branch along a muddy bank over to the water’s edge.  I asked him what he was doing and he said, “I’m going to try to catch a big fish.”  It ended up not being a successful fishing venture, but there was great enthusiasm in trying.

All week there was activity at the water’s edge.  In addition to the “fishing,” leaf swishing was popular, especially on the morning when we were trying to limit the involvement with water before school.  A toy boat was stranded out in the middle of the water and several “shoreliners” were eager to retrieve it.  Lots of discussion followed about where the water goes when it disappears.  Some children found it impossible to remain on the shoreline.  I noticed one young girl up to her ankles in water, shoes and all.  When I asked her what she was doing, she replied, “I needed to wash my hands!”

No part of the watery week was more appealing than the mud.  Several children exhausted their supplies of spare clothing by mid-week.  Some were soggy bottomed toddlers who picked up extra moisture sliding down the raindropped slide.  Most were kids who leaned out just a little too far into the muddy pools or those who were caught of guard and  “slipped” during a game of chase.  There was an abundance of muddy shoes, arms and legs, socks, and even personalized handprinted shirts.  Blobs of mud were dropped on overturned toy trucks providing the playground with unique mud sculptures.  Mud soup and mud pies were also on the menu.

The storms provided other opportunities, one being community service.  Puddles on the basketball court made for slippery hoop shooting, so it was a perfect time for putting push broom skills into action as well as taking turns.  Another side benefit was the huge branch that broke off in the toddler playground.  It was the main attraction for curious toddlers most of the week and by Friday was cut down and trimmed into kid-sized sticks for future imaginative play.  It’s been five days of wonderful weather-enhanced pretending, worth every bit of the muddy inconveniences, despite the unsuccessful fishing trip.