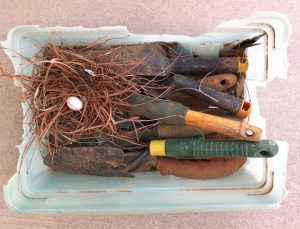 The other morning as I was out for my walk along the canal, I noticed a bird’s nest in a cholla.  It had an elaborately constructed ladder made of sticks, precisely woven throughout the prickly thorns, to give passage to a brave bird through the treacherous branches to its nest in the middle of the cactus.  It was an intentionally placed nest, in the heart of a plant that would spell instant death to most creatures.  It reminded me of a cholla we discovered years ago in the desert when our girls were little.  It was a similar cholla with a bird’s nest in it, with the exception that a large dead snake was caught in the branches after an unsuccessful robbery attempt.  It was quite dramatic and I can still picture it in my mind.

The current nest was completely intact with only one surprise.  As I peered closer into the safeguarded nest I saw two perfect blue eggs, unhatched and undisturbed.  Of course I wondered what happened to their parents, and why the eggs were still in the nest.  There must have been some life-altering experience to draw them away from the promise of their new offspring.

A few days later, one of the Seed teachers approached me with a slightly broken tub from her outdoor area that held several hand shovels, a bird’s nest and one small white egg.  There it was again, another abandoned nest holding an unhatched egg.  It seemed odd at this time of year, as we begin a new school year so filled with promise.  As the first week of school draws to an end, I keep thinking of the abandoned eggs.  I don’t know how common it is for birds to leave their unhatched eggs without there being some tragedy or drama involved.  The optimistic side of me hopes that something else came up, maybe an opportunity they couldn’t pass by.  Maybe birds aren’t emotionally attached to their eggs, although it’s hard to imagine they go through what they do, i.e. building nests in the middle of barbed wire-like cacti, without some sort of commitment to their young.

Pondering big questions brought on by eggs, in the end it comes down to accepting change and expecting that the unexpected will arise.  We all have our hopes and aspirations, yet sometimes there are detours.  The detours might bring suffering or they might produce joy.  As the years of my life accumulate, I’m finding that the more I embrace change as the only constant in life, the deeper sense of peace I feel.  This approach is helpful as we embark on a new school year, for it will undoubtedly be filled with its own share of detours, dreams and astonishing surprises.