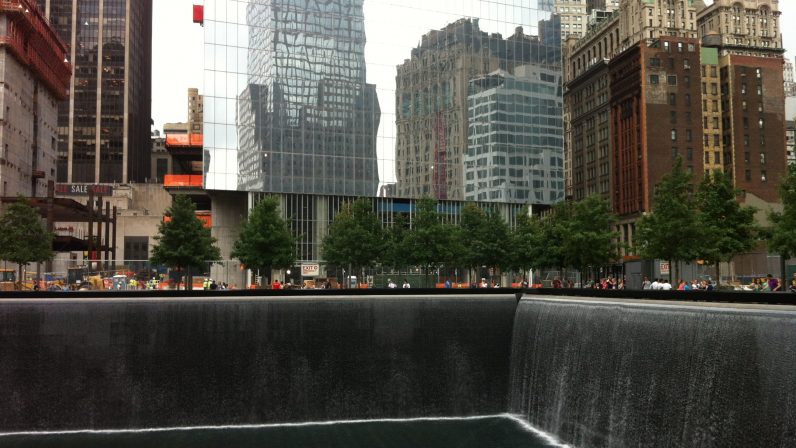 It rained during my morning walk on September 11.  It wasn’t a big rain, just a light mist that didn’t let up until I approached our driveway on the return home.  When I first started out I thought of going back to the house to get my umbrella, or at least a hat.  But then I decided to just to allow the rain to be a part of my walk in whatever way it was going to be.  It seemed like a fitting way to honor the day.  As I walked along the canal, I passed a construction site where jackhammers were already noisily in action.  That sound, along with the rain, carried me back to our day in New York City this summer.

For the one remaining vacation day before coming home to the desert, we chose a day in the city.  Our first destination was the 9/11 Memorial.  It surpassed all expectations.  In the heart of Manhattan, two deep pools were lined with names of those who perished in the attack.  The names were organized around the two pools, according to each person’s role in the day; first responders, airline passengers, flight crews, visitors to and workers from the World Trade Center.  Some were children.  Water cascaded over the edges, forming 30-foot waterfalls that eventually disappeared into smaller central dark pools.  All around the memorial, tall buildings reached skyward, including the new One World Trade Center. Surrounding buildings were reflected in its shiny glass walls, as if projected on a giant screen.  The place was swarming with people, many of them school groups.  Other than the sounds of the water and the jackhammers in the background, it was one of the quietest times I’ve been among that many people.  The sense of reverence was overwhelming.

As we moved on with our day, the rain began to fall.  Misty at first and then umbrella-worthy, it was fitting to be in New York in the rain.  It has rained on many significant days of my life, and this day fell into that category.  When I think of September 11, I recall how challenging it was that morning to be the director of a school.  The weight of responsibility was enormous and I knew our lives would never be the same.  Although I experienced the day far from the World Trade Center, it had a huge impact on me, just as it did so many on the planet.  Being in New York again showed me that people are strong and after awhile even the deepest wounds can begin to heal.  The rain was simultaneously a blessing and a cleansing.  Being at the memorial was a lesson in the ephemeral quality of each moment, a monument to the sacredness of life.