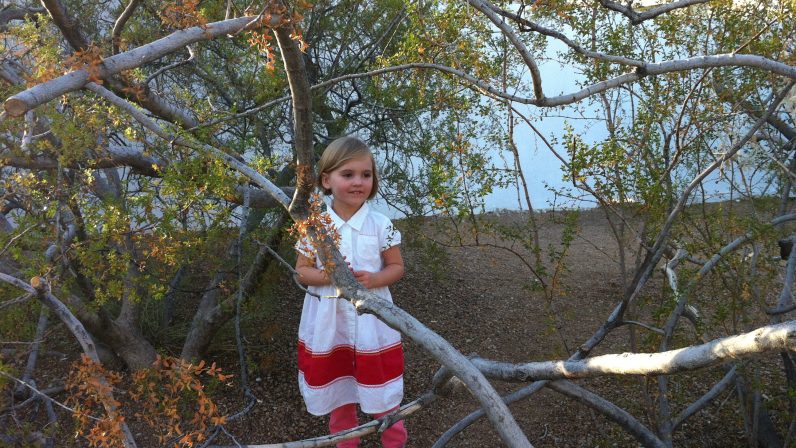 Running through the Woods

The creosote bushes in front of the Seed have become a world unto itself.  Day after day, dozens of children enter and leave the school by “running through the woods.”  Over the past decade, the bushes have grown huge, as have the imaginations of the children who have passed through them.  On the way in or out, students climb, run, investigate, and pretend as they move through the Seed’s desert portal.  Rainy days bring the additional feature of the creosote scent, reminding us that we are indeed desert dwellers.  It’s a little bit like the wardrobe closet in C. S. Lewis’s Chronicals of Narnia:  The Lion, the Witch, and the Wardrobe that transports four children from their everyday lives to an entirely different world.  The creosote bushes provide a daily message that imagining is welcomed and encouraged at Awakening Seed.

Richard Louv, who wrote Last Child in the Woods:  Saving Our Children from Nature Deficit Disorder, says this:  “An environment-based education movement–at all levels of education–will help students realize that school isn’t supposed to be a polite form of incarceration, but a portal to the wider world.” Louv has much to say about the role of nature in developing creativity, critical thinking, problem solving and imagination.  This has been on my mind all week after visiting a local school that, from my perspective, makes it their mission to eliminate opportunities for imagination and creativity, particularly outside, in the name of keeping order.  This, quite honestly, is heartbreaking to me.  The sparse playground with no garden or even a climbing structure is one thing, not allowing children to play independently of scripted games with designated equipment is another.  At what point do these children have a chance to travel back and forth through the “portal to the wider world”?

The morning after my visit I returned to the Seed and watched a group of children haul sticks and logs to create a seating platform annexed to Gwen’s Castle.  It was a team effort with plenty of problem solving.  We set appropriate guidelines to balance school safety requirements with innovation and stepped aside to allow creativity to flow.  The details of their play and intention with this building project remained in the hands of the children.  I walked away from the group of happy, engaged children and understood once again what Richard Louv is advocating.  We all need more nature in our lives if we want a future filled with visions of wellness, hope and peace.  I like to think each child “running through the woods” in front of the Seed is bringing a bit of these visions into the school and then carrying them back out into the world.

2 thoughts on “Running through the Woods”