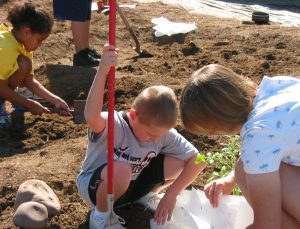 There are two additional high school graduation announcements on the alumni bulletin board, both sent by Seed classmates of Betty and Sami.  Over the long weekend I was roaming around Facebook, checking out our alums as I occasionally do, and ran across a picture of each of them.  Their stories called out to me.  The path each took to graduation was considerably different, although one common thread linked them:  overcoming personal challenge.  I checked with their families for permission to write about them in my blog this week and each gave their blessing.  They are both stories that continue to inspire me.

Emily and Parker were members of my 2004-2005 4th/5th grade class.  That class grew the best individual gardens I’ve seen from kids in my whole teaching career.  It was a winter we had a lots of rain, which made gardening an easy process.  The other day I found this picture of the two of them preparing the soil for their personal plots.  From our year of gardening and learning, each of them has grown into a remarkable young person.

Emily was always a strong, determined girl with plenty of talents.  In addition to excelling in academics, she played four years of varsity soccer and received a full appointment to the United States Coast Guard Academy starting this fall.  What isn’t mentioned in this success story is that Emily’s mother passed away a few months ago.  Emily is fortunate to have the supportive family she has, particularly her dad, Jim, who is a past chair of the Seed board of directors.  Nevertheless, finishing out her senior year and graduating without her mom was, I’m certain, no easy task.  Knowing Emily, though, this experience will strengthen and build her character.

Parker has a much different story.  Some of you may be familiar with him from a post last year when his service dog Candy was lost for nearly a day.  Candy was at the groomer’s and an employee inadvertently left the back door unlocked, allowing Candy to escape.  Parker, who has Asperger’s syndrome, and his family were on the news, pleading for anyone with information about Candy’s whereabouts.  Fortunately, she was found safely the next day.  I knew Parker in the days before he had Candy, when he struggled with life in so many ways.  Candy helped him develop a calmer way of being in the world.

After Parker graduated from the Seed, he homeschooled for awhile and came to the Seed once a week for “tech time” with me.  Among other things, Parker and I created a website for those living with Asperger’s called “On the Road with Parker.”  He wrote original songs, created whacky photos, and offered tips for how to handle life with autism.  I’m sure I learned more than he did.  Parker tried public middle school for awhile and eventually landed at Gateway Academy, a school specifically developed for children with Asperger’s and high functioning autism.  He thrived at Gateway and is one of their 2013 graduates.  Parker is now driving a car (okay, he’s been driving on the family farm in Kansas sine he was six) and is enrolled for the fall semester at the University of Advancing Technology.  He plans to major in digital video.  I guess all our tech time sessions paid off!

Emily and Parker’s tenacity in the face of hardship will serve each of them well as they continue on into adulthood.  One of my favorite things about the Seed is seeing how what was planted in the soil here long ago comes to fruition.  I’m pretty sure with these two we will not be disappointed.