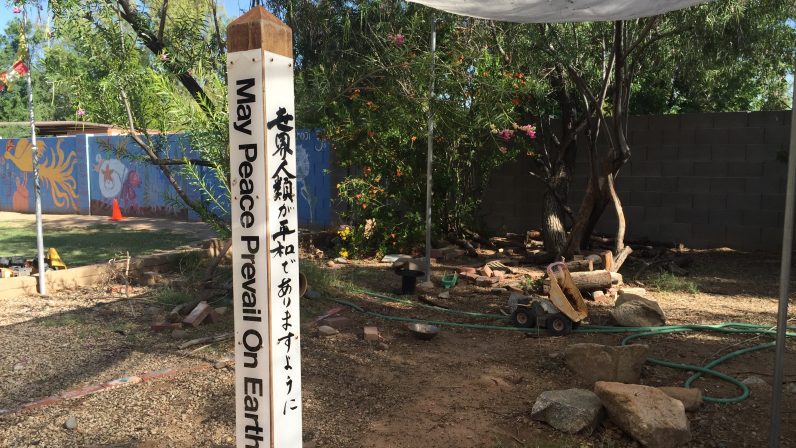 May Peace Prevail on Earth

Until a few days ago, I’d never heard of the Cu Chi Tunnels.  Our friend Kevin, a former Seed teacher, sent me a photo of a peace pole in Vietnam.  He said it reminded him of ours at the Seed.  The one he spotted in Ho Chi Minh City (Saigon) was located near the Cu Chi Tunnels.  As it turns out, the Cu Chi Tunnels are a triple-decker network of tunnels built in the 1940s and used extensively by the Viet Cong during the Vietnam War.  During the war the tunnels served as hiding spots, a place to store weapons, hospitals, kitchens, command centers and living quarters.  One source stated that an entire village lived within the tunnels under terrible conditions (http://www.history.com/topics/vietnam-war/cu-chi-tunnels).  This 150 mile maze of tunnels was where our enemies lived.  Fighting for a cause in which they believed, they inhabited a tight space infested with “bats, rats, snakes, scorpions, centipedes and fire ants,” some of which were used with bamboo sticks to make traps for GIs entering the tunnels. (http://www.roughguides.com/destinations/asia/vietnam/ho-chi-minh-city-and-around/around-ho-chi-minh-city/the-cu-chi-tunnels/)  Malaria and intestinal parasites were prevalent.  I can see why a peace pole was erected in this place.

At the peak of the Vietnam War in 1969, I graduated from high school.  Other than one of our hometown boys being killed in the war, it was an abstract event in my life at the time.  However, backdropped by the Vietnam War and the Civil Rights Movement, it was then that the seeds of peace came alive in me.  So much of what the Seed is all about has roots back to this era.

The Seed’s peace pole was a gift from a family in the early 90s.  For many years we kept it in a rolling container in the building until it finally found a permanent home in Gwen’s Castle.  It’s the perfect spot for it, surrounded by trees and lively children, in a space created by love. This past week I’ve learned that “There are tens of thousands of peace poles in 180 countries all over the world dedicated as monuments to peace.” (http://www.peacepoleproject.org)  Peace poles are in places like Ground Zero in NYC, Mt. Everest in Nepal, Machu Picchu in Peru, the Giza Pyramids in Egypt, a Nevada nuclear test site, and Baghdad, Iraq.  Peace poles are at places of hope such as schools, parks and museums, and places where great loss has occurred.  Places like the Cu Chi Tunnels.  Extraordinary humans like Mother Teresa, the Dalai Lama and Wangari Maathai, the woman who inspired massive tree planting trees by women in Kenya have been photographed beside peace poles.

As I’ve learned more about the Peace Pole Project and the Cu Chi Tunnels, interconnection comes up again.  The father from the family that gifted us our peace pole was Kevin’s mentor who told him about the Seed, the same Kevin who is now teaching in Vietnam and sent the photo of the peace pole at the Cu Chi Tunnels.  The peace pole is a symbol of all we’ve done at the Seed to make the world a more peaceful place, and a steady reminder to keep at it.  It’s an honor to be a part of this network of beings living with peaceful intentions.

One thought on “May Peace Prevail on Earth”