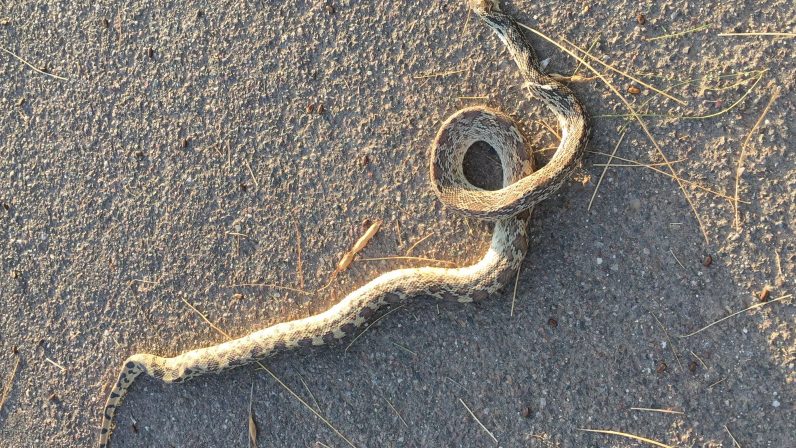 I was a girl who liked snakes.  Growing up in rural Nebraska with fields of prairie grass at my fingertips, we had frequent specimens available.  It wasn’t unusual for me to walk in the house with a gopher snake wrapped around my shoulders.  My mother was remarkably calm, considering the number of legless reptiles that entered our home.  My sister once brought a small snake inside that was on the loose for about a week.  Snakes were a part of my childhood.

In my adulthood I’ve had a few snake encounters, two of them with rattlers.  The first one was when we were camping in the desert and our children were playing together in a wash.  When we heard the rattling sound, we initially thought it was one of their small toys.  It was a rattlesnake.  No harm was done and our friend with snake experience skillfully scooped it up and dropped it in the desert far from our campsite.  The second encounter was at Bryce Canyon one afternoon while hiking alone on the trail.  The rattler was in my direct path.  I paused, gently said, “I wouldn’t hurt you,” then watched it slither off into the bushes.  Once my heart rate returned to normal I gratefully continued on my way.

Except for finding an occasional snake skin, I haven’t thought much about snakes until lately.  In the last week, three snake encounters have appeared on my radar.  I pay attention to sets of three.  On the third day of our new school year, I was out for my morning walk along the canal.  Quite by surprise, I came upon another snake in my path, this one lying freshly dead in the dirt.  My first instinct was to check if it had rattles.  It didn’t.  Nevertheless, it was at least three feet long and the image of the lifeless snake with ants crawling all over its head made a lasting impression.  I wondered how it died and thought about that snake till the next morning when I walked by the same spot and it was gone.  The next snake story came from my daughter who was in the mountains with her family over the weekend.  She reported that our youngest granddaughter was playing in their back yard and let out a blood-curdling scream.  A baby rattler had paid them a visit.  Then on Monday, there were news reports about a teacher in Fountain Hills who was bitten by a rattlesnake as she tried to shoo it out of the cafeteria where there were children.

I’m not sure what it means that three snake incidents have happened within a week.  I always look for the metaphors.  Throughout my life, when I’ve come upon a snake there’s generally been an element of surprise.  I also associate snakes with wisdom.  Perhaps they come into our lives to keep us on our toes, to measure our responses to life’s ever present changes.  If we’re lucky and pay attention, we might gain some wisdom, too.

One thought on “Three Snakes”