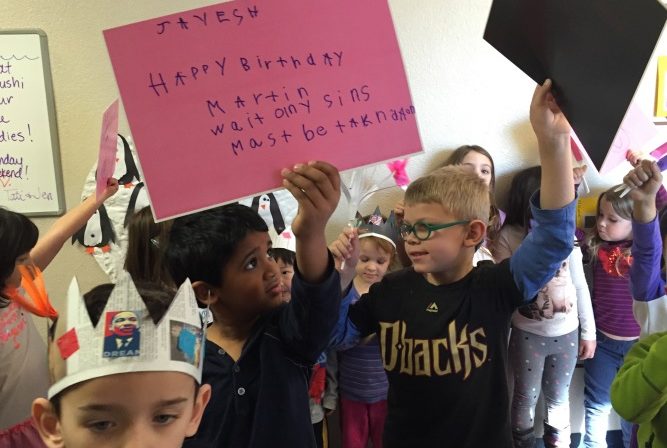 This year I took notes.  Although I’ve heard Elsie’s stories at least 25 times, I leaned in closely to listen with new ears to what her words would reveal.  I didn’t want to miss anything.  There is always more and this year held a new layer of meaning.  Last summer Bill and I had the great privilege of visiting her ancestral home in rural Virginia.  It was a deeply moving experience to sit on the steps of the home where Elsie grew up.  As I sat on the concrete steps, all the stories she’s told us year after year were right there beside me.  In many respects, I grew up with her stories, too, as they shaped my perspective on many aspects of life, particularly race.

Our long friendship has included an ongoing conversation about a topic I believe many avoid, a conversation necessary now as much as at any other time.  Elsie’s gracious annual offering of her life stories not only gives young Seed students a connection with a real person who lived through the Civil Rights Movement, it also gives them a chance in a safe setting to ask the big questions on their minds.  As years have accumulated, I’ve grown more and more appreciative of this safe haven for questions.  Throughout my own childhood, race was hardly ever a part of any conversation.  I grew up at the same time as Elsie, in a setting similar to the place of her childhood.  We both had strong family relationships and plenty of time and space to play, to imagine, to dream. The obvious difference was hers was a black world and mine was white.  Each carried its own burdens and responsibilities.

As a teenager I was increasingly aware of issues related to the Civil Rights Movement but didn’t know how to respond, except to feel guilty that I was white.  I would have benefited from conversations like those we have at the Seed.  Over time I’ve come to see that feeling guilty about white privilege isn’t necessarily the most beneficial path for anyone.  One of the most powerful parts of being on Elsie’s ancestral land was knowing that I was standing in the place where her life began, a place not unlike that of my own childhood beginnings.  These two rural places, hers in Virginia and mine in Nebraska, were what set the trajectory for each of our lives.  Our lives have brought experiences that are vastly different, in large part because of the color of our skin.  Yet there are similarities that always  strengthen our friendship and keep the conversation going.  We are both teachers who will continue our work to make this world a better place for generations to come.  I also know neither of us will let up as long as we are able to do the work.

In the end, I decided not to use any of my notes from Elsie’s Tuesday visit to the Seed.  It seemed too personal to do so, and I wanted to honor the sacredness of our time with her.   We all felt it and the Pre 4s/Kindergarten MLK parade down the hallway was the perfect send-off for Elsie.  She left with a big smile saying, “Only at the Seed…”