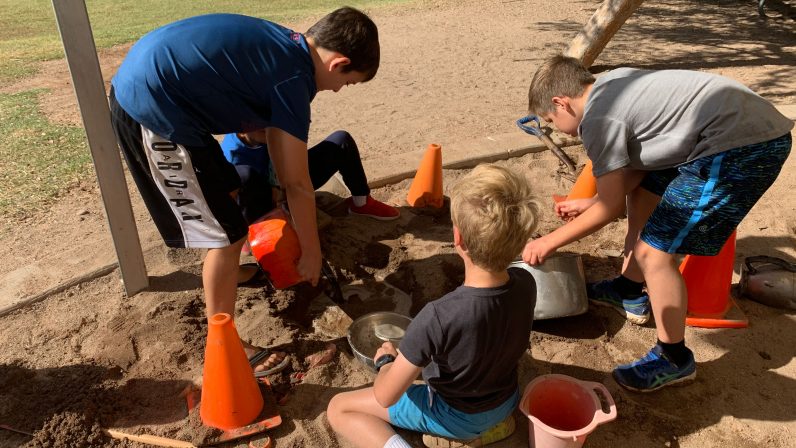 On Tuesday a boy approached me on the playground and said another child told him he couldn’t play with him.  He said, “That’s including.”  I clarified that what he was experiencing was actually called “excluding.”  Then I invited the child who was excluding to come over and talk.  The first child said, “I don’t like it when you won’t let me play with you.”  Child number two was reluctant at first, and then I explained a long-time Seed rule based on the book You Can’t Say You Can’t Play.

Written by Vivian Paley, one of the most prominent early childhood educators of these times, the premise is that everyone is allowed to play.  Children have the option of playing alone; however, if anyone is included, everyone who wants to play can be a part of the activity.  Vivian’s work is based on interviews of children, parents, and other educators.  She also wrote of the importance of teachers and parents advocating for the children who have yet to learn how to do it themselves.

As I explained her philosophy to the child who wanted to exclude, he hesitantly listened to his friend’s words.  Finally he agreed to let him join in.  As I watched the group evolve, several other children wandered over to help with digging, filling water to dump into their holes, and even sift foam off of the muddy water with a strainer.  The group of older boys was collaborative and inclusive for an entire recess period.  Even a sweet kindergarten girl was included in their play.

Thinking about this interaction, I was reminded of the many life lessons that begin and are nurtured here at the Seed.  Practices such as kindness, empathy, and inclusion are introduced early.  They begin in our toddler program and continue to expand as children move through the older classes.  One reason these qualities flourish is that teachers are constantly observing closely the interactions of children.  We listen, ask questions, and facilitate necessary conversations.  When words are required to help a friend feel better, teachers provide guidance and support for the message to be successfully conveyed.  A child who wants a turn, or needs help finding words to say how she feels when someone takes her toy, is given a scaffolding of practice that will later bring her to independence.

Teaching with this level of attention to detail can be exhausting.  It would be easier at times to look the other way and pretend there wasn’t a problem.  But that’s not what we do.  As a staff we actively seek ways to help children move through life, learning from challenges and gaining skills that will make them confident, compassionate thinkers.  Our work enables children to develop strong voices, so that even as a three-year-old they can say, “I don’t like when you push me,” or “I want a turn.”  Although our attention to detail may feel repetitive and slow going, I’m confident that the work will serve our students in the long run, as they mature into the the mindful humans we hope they will be.